The story of King Ambarisha is a beautiful and unique story in Hindu mythology reiterating the humble power of devotion against the greatest Siddhis of even exalted Brahma Rishis like Sage Durvasa. By completely surrendering to the Lord with faith and devotion one can escape any curse or calamity and this has been proved time and again in the stories from Hindu Scriptures.

King Ambarisha was the son of King Nabhaga and belonged to the Ikshvaku dynasty. The story of King Ambarisha and his faith and devotion to Lord Narayana are mentioned in the Bhagavat Purana. Inspite of immense power, wealth and fame Ambarisha, right from childhood, was always immersed in the form and name of Lord Vishnu. Once, he and his wife decided to perform the Ekadashi Vrata for a whole year. With the blessing of their Guru Vasishta they performed the sacred Vrata with great faith and devotion. Lord Vishnu was immensely pleased with them and as a boon granted that his Sudarshana Chakra would protect the King and his kingdom at all times. 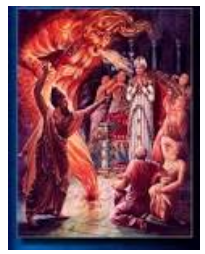 Once during one of his monthly Ekadashi fasts, as King Ambarisha was coming to the completion of his Vrata and was about to break his fast Sage Durvasa approached the King. The King humbly asked him to join him for food along with his disciples. Sage Durvasa and his disciples then went to the banks of the river to bathe. The sage then got into meditation and time lapsed by. As the auspicious time for breaking the fast was approaching King Ambarisha was in a dilemma and after taking the advice of the wise sages and ministers of his Kingdom he took three spoonfuls of water to break his fast. Meanwhile Durvasa came out of his meditation and approached the palace. Through his divine powers he realised that the King had broken his fast. The enraged sage then pulled out a strand of his hair and created a demon named Krucha to kill the King. 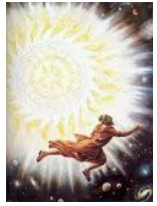 Everyone in the Kingdom was fear stricken but Ambarisha stood unaffected. With folded hands he began praying to the Lord. The Sudarshan Chakra of the Lord then came to protect the King and killed the demon and then began to chase after Durvasa. Sage Durvasa ran for his life with the Chakra following him. He sought shelter from the Gods including Lord Brahma and Lord Shiva but none could help him. He then went to Lord Vishnu and fell at his feet but Lord Vishnu said that he was helpless as he was bound by his devotee ‘Bhakta Paradheena’. He asked him to ask King Ambarisha for forgiveness.

Sage Durvasa then ran and fell at the feet of King Ambarisha. King Ambarisha prayed to Lord Vishnu to free the great sage from further ignominy and pardon him. Immediately the Chakra was pacified and returned to the abode of Vishnu. Durvasa then humbly asked the King for forgiveness.

The stories of Hindu mythology encourage mankind on the path of devotion and urge them to lead a moral life following the principles of right living and truth. These stories have been passed on through generations and help in transmitting the rich legacy of the Indian scriptures for aeons to come.