The Shower of Golden Gooseberries

Adi Shankara was one of the most revered Hindu saints and philosophers in the 8th century who was said to be an incarnation of Lord Shiva. When there was chaos in India and a number of sects arose in the matter of philosophy and religion leading to superstition and bigotry, Adi Shankara restored Vedic Dharma and Advaitha Vedanta to its pristine purity and was a blazing flame who removed the darkness that engulfed India at that time. In the food stories of Indian mythology is the famous one of the origin of the Kanakadhara Stotram composed by Adi Shankara. 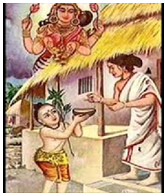 Adi Shankara was said to have taken up Sanyas at the tender age of eight. Students had to beg for alms for their daily meals. Since feeding Brahmins was considered highly meritorious they were never sent away empty handed. One day as Shankara was begging for alms he went to the house of a poor Brahmin lady. The lady was unhappy as she had nothing to offer to the Brahmin boy. She went inside and searched and finally found one gooseberry (amla) and requested him to accept it, asking him for forgiveness as she had nothing more to offer him.

Moved by her plight, Shankara burst forth into a song of 21 verses in praise of Goddess Lakshmi asking her to grant riches to the poor woman. The Goddess was so pleased that she is said to have showered gooseberries of pure gold. This song became famous as the Kanakadhara Stotram.

Brief description of the hymn 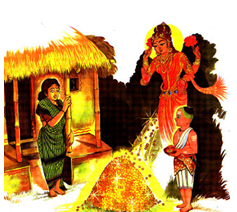 Some legends state that Goddess Lakshmi informed Shankara that the poor woman’s past karmas did not qualify for her getting riches and she had to suffer a life of abject poverty but Shankara pleaded that her selflessness in giving the gooseberry inspite of her poverty and hunger now qualified her for the grace of the Goddess. This argument of Shankara is said to have pleased the Goddess. The hymn praises Goddess Lakshmi in her various forms as Parvati, Lakshmi and Saraswathi and describes the beauty, power, personality and graciousness of the Goddess.

This hymn is famous in Hindu mythology and the story has been repeated for generations to inspire mankind to move forward with faith and devotion and never lose courage even amidst poverty and suffering confirming the dictum that whatever has been offered to the Lord will be returned a thousand fold due to the Lord’s compassion, the only requirement being a heart filled with devotion and humility, irrespective of class, creed or gender.

To the Hari who wears supreme happiness as Ornament,
The Goddess Lakshmi is attracted,
Like the black bees getting attracted,
To the unopened buds of black Tamala[1] tree,
Let her who is the Goddess of all good things,
Grant me a glance that will bring prosperity.

Again and again return ,those glances,
Filled with hesitation and love,
Of her who is born to the ocean of milk,
To the face of Murari[2],
Like the honey bees to the pretty blue lotus,
And let those glances shower me with wealth.

With half closed eyes stares she on Mukunda[3],
Filled with happiness , shyness and the science of love,
On the ecstasy filled face with closed eyes of her Lord,
And let her , who is the wife of Him who sleeps on the snake,
Shower me with wealth.

He who has won over Madhu[4],
Wears the Kousthuba[5] as ornament,
And also the garland of glances, of blue Indraneela[6],
Filled with love to protect and grant wishes to Him,
Of her who lives on the lotus,
And let those also fall on me,
And grant me all that is good..

Like the streak of lightning in black dark cloud,
She is shining on the dark , broad chest,
Of He who killed Kaidaba[7],
And let the eyes of the great mother of all universe,
Who is the daughter of Sage Bharghava[8],
Fallon me lightly and bring me prosperity.

The God of love could only reach ,
The killer of Madhu[9],
Through the power of her kind glances,
Loaded with love and blessing
And let that side glance ,
Which is auspicious and indolent,
Fall on me.

Capable of making one as king of Devas in this world,
Her side long glance of a moment,
Made Indra[10] regain his kingdom,
And is making Him who killed Madhu [11] supremely happy.
And let her with her blue lotus eyes glance me a little.

To her devotees and those who are great,
Grants she a place in heaven which is difficult to attain,
Just by a glance of her compassion filled eyes,
Let her sparkling eyes which are like the fully opened lotus,
Fall on me and grant me all my desires.

Please send your mercy which is like wind,
And shower the rain of wealth on this parched land,,
And quench the thirst of this little chataka[12] bird,
And likewise ,drive away afar my load of sins,
Oh, darling of Narayana[13],
By the glance from your cloud like dark eyes.

She is the goddess of Knowledge,
She is the darling of Him who has Garuda[14] as flag,
She is the power that causes of death at time of deluge,
And she is the wife of Him who has the crescent,
And she does the creation , upkeep and destruction at various times,
And my salutations to this lady who is worshipped by all the three worlds.

Giver of wealth, giver of pleasures to all senses,
Giver of the right to rule kingdoms,
She who has lotus like eyes,
She to whom Salutations remove all miseries fast,
And my mother to you are my salutations.

He who worships your sidelong glances,
Is blessed by all known wealth and prosperity,
And so my salutations by word, thought and deed,
To the queen of the heart of my Lord Murari[22].

She who sits on the Lotus,
She who has lotus in her hands,
She who is dressed in dazzling white,
She who shines in garlands and sandal paste,
The Goddess who is the consort of Hari,
She who gladdens the mind,
And she who confers prosperity on the three worlds,
Be pleased to show compassion to me.

Those eight elephants from all the diverse directions,
Pour from out from golden vessels,
The water from the Ganga[23] which flows in heaven,
For your holy purifying bath,
And my salutations in the morn to you ,
Who is the mother of all worlds,
Who is the house wife of the Lord of the worlds,
And who is the daughter of the ocean which gave nectar[24].

She who is the Lotus,
She who is the consort,
Of the Lord with Lotus like eyes,
She who has glances filled with mercy,
Please turn your glance on me,
Who is the poorest among the poor,
And first make me the vessel ,
To receive your pity and compassion.

He who recites these prayers daily,
On her who is personification of Vedas,
On her who is the mother of the three worlds,
On her who is Goddess Rema[25],
Will be blessed without doubt,
With all good graceful qualities,
With all the great fortunes that one can get,
And would live in the world,
With great recognition from even the learned. 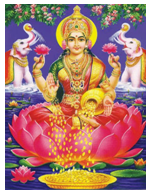