Indian mythology has fables with morals covering all aspects of education and all religions around the world make use of such stories to emphasise the qualities of good over evil. 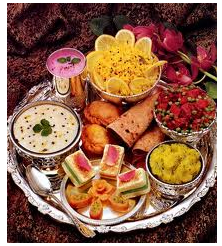 Once in ancient times, a great sage was teaching a group of disciples in a hermitage. One of the disciples stood up and asked the Guru how to differentiate between good and bad. The Guru then related to him the following story. Once a King wished to organise a large banquet and invited the Gods and demons to it. He wished to show his subjects the inherent difference between the two. All the invited guests arrived. The demons arrived noisily and ordered the King to serve them first. The King agreed and said that the only condition was that wooden planks would be tied to their hands while eating. When the demons realised that the Gods too were to be subjected to this condition they reluctantly agreed.

The demons were seated side by side and when the delicious food was served they found that their hands could not be bent and so were unable to eat their food. It was impossible to eat without messing up their expensive clothes. Angrily they left the banquet. It was now the turn of the Gods. Being of a more peaceful nature they sat down patiently reciting the invocation prayer. When the delicious food was served the Gods realised that their hands could not be bent because of the wooden planks. But they realised that they could feed the person sitting next to them easily. Thus each of them began feeding the next person. In this way they all enjoyed their food and were satiated. Thanking the King, they all returned to their homes peaceful and content.

The King then informed his subjects that what they had just observed were the attitudes in ‘Giving’ and ‘Taking’. The Gods thought about selflessly serving others while the demons only thought of their individual self interest and therein lay the inherent difference between them. Relating this story the great sage then told his disciples that when a society practices the attitude of ‘Taking’ there is selfishness, corruption and disharmony prevalent but when society practices the attitude of ‘Giving’ there is harmony, peace and happiness everywhere. Thus, where universal love and principles of right living are practiced, life is good while abstinence from right activity leads to sin and evil.

All religions have inspirational stories in their scriptures which are effective instruments of educating the masses by conveying moral and spiritual messages. These stories break down the concepts of Truth and Brahman into easily understandable universal laws of right conduct, moral and human values that can be grasped and practised by all generations and which help to educate society on progressing on their goals of self realisation and bliss.

References
Published On: 13-11-2014
(Others):
2019-01-19
Previous Post: The Shower of Golden Gooseberries
Next Post: Water The Source and Sustenance Ganga