Traditional dresses of Jammu and Kashmir

Jammu and Kashmir, one of the beautiful states of India, is popular for its natural beauty and rich culture. This state is populated with Kashmiris and a minor percentage of other ethnic groups such as the Ladakh, Dogras and Gujjars. The rich culture and landscape of the region are reflected in the traditional dress worn by the people of Jammu and Kashmir. Most of their clothes are made of wool and silk with intricate embroideries.

The intricate pattern of the traditional clothes worn by the women folk in Jammu and Kashmir is further heightened by various exotic accessories. Some of the most popular are earrings, anklets and bangles apart from the use of ornamentation in clothing. Silver Jewellery such as neck pieces, bracelets and heavily bejeweled chains are worn by the Muslim women. Similarly, golden pendants ‘Dejharoos’ are worn by the Hindu women. The ‘dejharoos’ comprises of two decorative gold pendants which are suspended through gold chains or silk threads. This pendents are also a symbol of a woman’s married status among the Kashmiri Pandits.

Ethnicity of Wears in J&K

The state of Jammu and Kashmir in many respects has problems of isolation, backward and inaccessible areas, and lack of an industrial base and employment opportunities. However, the state is vested with a substantial water resource, mineral base, and is famous the world over for its exquisite handicrafts, handloom products, tourism, horticulture produce and cottage industry. While the state has enormous potential for the flourishing of various industries, it has lagged behind in the field of industrialization. For promoting prosperity and ensuring equitable economic development throughout the state, the state government has been encouraging the flow of investments in areas with high employment potential and helping in utilizing local skills and raw materials to advantage.

The woolen and silken carpets of the state remain unparalleled on the national scene for quality and design. The crewel embroidered pashmina, and embroidered raffal shawls, pattern of Kani shawls, intricate wood carving, production of flora design in paper machie goods, etc., are some of the world famous traditional crafts of the state.

Costumes of Jammu and Kashmir provide an account of the various cultural and ethnic influences in the long history of the region. What makes Jammu and Kashmir`s costumes and attires different from the rest of India is because of the blend of three distinct cultural backgrounds. Filled with greener pastures the dressing in the region of Kashmir becomes more colorful with exquisite embroidered work that accompanies their clothes, especially the shawls and Pherans, which are embroidered with intricate patterns of multihued threadwork. Up above in Ladakh, the dressing sense is having a trans-Himalayan influence in it. One can check the true colours of this barren cold desert in the festive seasons when the ceremonial attires just astound the spectators. Kashmiri Muslims used to wear the pheran, a long loose gown hanging down below the knees, a white turban tied on a skull cap, a close-fitting shalwar and lace less shoes called gurgabi. A white piece of material is hung on their shoulders like a stole. Hindu men wear churidar pyjama instead of shalwar. The less affluent Muslims wear skull caps, which looks cute and does not carry any shawl.

The pheran is the most commonly worn garments among men. Hindu men usually wear churidars while the Muslim men are dressed in salwars beneath the formidable pherans. The pheran is a loosely fitted woollen garment which makes use of the `kangri`. The kangri is an earthen vessel which is filled with flaming coal. It is then placed within a container made of natural fiber. The kangri is usually placed in the front, skillfully shrouded by the pheran. It functions as an internal heating system in order to keep the wearer warm during the extreme cold winters.

The `pathani` suit, also referred to as `Khan-dress`, is a popular garb among the men, especially in Srinagar. Turbans are common among Muslim men. Skull caps are extremely prevalent, especially among the peasants and the `karakuli` or fur skull caps along with the Pashmina shawls worn by men often symbolize royal lineage. The Pashmina shawls are made from traditional woollen textiles which are obtained from mountain goat. Intricate work is done on both sides of these shawls. The special Kashmiri embroidery work, Kasida, is done in such a manner that the patterns appear in a uniform manner on both sides of the fabric. The Pashmina belts and `kamarbands” are common too. The Muslim men wear lace-free shoes known as Gurgabis. Brocade, camel hair and cashmere are the main elements that are used in the making of coats and fleece for men.

Kashmiri women are among the most beautiful in India. They have “an English rosiness of complexion behind the Eastern tan”. The color of their hair ranges from golden red to brunette and that of eyes from green, blue, grey to black. Besides being boats-women and farmers, the women of Kashmir lend a hand to their men-folk at shawl making, embroidery and other handicrafts.

The pheran is the prominent attire for Kashmiri women as well. Traditionally, there are the `poots` and the pheran, comprising two robes placed atop the other. The pheran worn by women, usually has zari embroidery on the hem line, around pockets and mostly on the collar area. The pherans worn by the Muslim women are traditionally characterized by their broad sleeves and reach up to the knees. However, the Hindus of Jammu and Kashmir wear their pherans long, stretching up to their feet with narrowed down sleeves. Often, the pherans are wrapped tightly with a piece of creased cloth called `lhungi`. The Hindu women wear a headdress called the `taranga`, stitched to a suspended cap and it narrows down at the back, towards the heels. The taranga is an integral part of the wedding attire among Hindus.

Elaborate zari embroideries or floral patterns around the neck and the pockets are a prominent feature of a Muslim woman`s pheran. Brocade patterns adorn their long sleeves.

The pheran is accompanied by red headgears known as the `kasaba`. The kasaba is stitched in the form of a turban and is pinned together by ornaments and silver brooches. A pin-scarf suspended from the kasaba descends towards the shoulder. It is worn by the Muslim women as a part of their regular attire. The `abaya` is also commonly worn by them. For unmarried Muslim women, the costumes vary to some extent. The elaborate headgears are replaced by exquisitely ornate skull caps embellished with threads of gold, talismans and gems.

The Jammu and Kashmir landscape is dotted with various ethnic groups.

Dogra is a tribe residing amidst the hilly topography of Jammu. The Dogra Women wear long, loose tunics, close-fitting chudidars and dupatta or cap to complete their charming ensemble.Similar fitted pajamas and kurtas of considerable length constitute the costume of the Dogra men. The use of kamarbands and turban are prominent among the Dogra elders.

The Gujjars, also residents of Jammu, are the second-largest group of ethnic tribes inhabiting in Kashmir. The members of this tribe are mostly shepherds. The Gujjar women are dressed in loose sleeved tunics coupled with baggy salwars. They cover their head by an elaborate headgear, akin to the ones worn by the women in Turkish villages.

Kashmir is known internationally for its style of embroidery which is found on garments like the phiran, tapestry, curtains, shawls and household linen. The craftsmen draw inspiration from the landscape and the embroidery is renowned for its beauty and richness. The main patterns in this region are chinar leaves, cypress cones, the lotus and almonds.

Kashida, the local lingo for the embroidery, in a number of stitch styles, of which, the sujni stitch is used when uniformity is desired on both sides, like in choice shawls. Zalakdosi, the chain stitch done with a hook is found on chogas (cloaks) and rugs with long and flowing designs. A buttonhole stitch for thick fillings is Vata-chikan. Amli embroidery in multicoloured threads is found in Kani shawls while Do-rookha is a double-sided stitch used to create similar patterns on either side but with different colour combination. Gold or silver embroidery is done around the necks of the gown or phirans while chain and cross-filling stitches are used to do crewel work on namda or carpets. Gabba is another type of floor covering made out of old blankets with a combination of applique work and chain stitches. Patterns on gabbas and namdhas are in floral and geometrical designs. Shawls and furnishing fabrics are also embroidered while the famous Pashmina shawls are embroidered with fine silk thread.

Perhaps, nothing epitomizes the glorious history of Kashmiri craftsmanship, as warmly and beautifully, as does the Pashmina. A legacy of the great Moghuls, it evolved over three hundred years under the patronage of four different rules. Some of the craftsmen in Srinagar have managed to revive that old glory and provide replicas of 16th & 17th century hand embroidered shawls. It even takes 5-12 months to prepare a hand embroidered shawl.

There are three fibres from which Kashmiri shawls are made – wool, pashmina and shahtoosh. The prices of the three cannot be compared – woolen shawls being within reach of the most modest budget, and shahtoosh being a one-in-a-lifetime purchase.

Woolen shawls are popular because of the embroidery working on them, which is unique to Kashmir. Both embroidery and the type of wool used bring about differences in the price. Wool woven in Kashmir is known as raffel and is always 100 percent pure. Sometimes blends from other parts of the country are used and Kashmiri embroidery works on them. These blends contain cashmilon, cotton, or a mixture of both.

Many kinds of embroidery are worked on shawls. ‘Sozni’ (needlework) is generally done in a panel along the sides of the shawl. Motifs, usually abstract designs or stylized paisleys and flowers are worked in one or two, and occasionally three subdued colors. The stitch employed is not unlike stem stitch, and only the outline of the design is embroidered. The fineness of the workmanship and the amount of embroidery determines the value of the shawl. Sozni is often done so skillfully that the motif appears on both sides of the shawl, each side having a different color scheme. This naturally has a bearing on the cost.

Another type of needle embroidery is popularly known as ‘papièr mâchè’ work because of the design and the style in which it is executed. This is done either in broad panels on either side along the breadth of a shawl, or covering the entire surface of the breadth of a shawl or that of a stole. Flowers and leaves are worked in chain stitch in bright colors such as those of papier-mache and each motif is then outlined in black.

The yarn is spun either from shahtoosh alone, or mixed with pashmina, bringing down the cost somewhat. In the case of pure shahtoosh too, there are many qualities – the yarn can be spun so skillfully as to resemble a strand of silk. Not only are shawls, made from such fine yarn, extremely expensive, but can only be loosely woven and are too flimsy for embroidery to be done on them. Unlike woollen and pashmina shawls, shahtoosh is seldom dyed – that would be rather like dyeing gold! Its natural color is mousy brown, and it is, at the most, sparsely embroidered.

Kani Shawls are another rare items which are also produced for art lovers. Those who know understand that craftsman puts his heart and soul to produce such shawls

Jammu and Kashmir has been famous for its natural beauty since time immemorial and has been aptly described as “heaven on earth”. 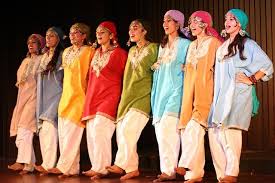