Introduction and history of traditional theatres in India:

Derived with the rich and diverse heritage India has always offered the greatest of shows and history in the World. Just like it, theatre is an amalgamation of dance, music, drama, deep specter of speech and performance purporting the roots of localities and nationality. In time and with time the traditional theatre reflects the interpersonal qualities of communication with the folklore of vibrant performances.

India already shares a rich history of theatres and artists which contributes to many other social and personal developments. Artists in ancient times possessed a special place in the society and even in the King’s palaces. This brought humble respect for the art and the artist as well in the form of celebrations and festivals.  Each form of theatre denotes the unruly power of one’s community and culture. This brought diversity together and patronized the creativity into different forms of theatres. Apart from the performance perspective traditional theatres played an important role in establishing the modern era and modern art of theatre. With the help of unity and sets of vivacious cultures, a type of theme will be shown in each form of a traditional theatre show.

According to Indian history, community and diversity, the traditional theatre has the following forms of performing arts:

Tradition and historical events have become the most enticing forms of art. Art speaks the history and in the form of theatricals, it dances on its own. One such form is Bhand Pather, originated from Kashmir which is practiced and performed by the local people of Kashmir. 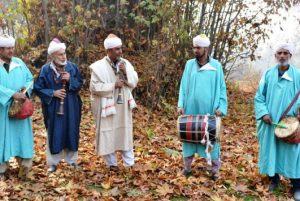 The term Bhand was originated from Sanskrit which entered Kashmir through Persia in the early 14th century. These are the folk entertainers who perform a form of farcical theatre. Their genre and theme will be just to entertain and interact with the audience. Acting, dance, and music with the folk taste in their local language this form of traditional theatre consolidates the social event and highlights the mythological characters. Underneath the foothills of the Himalayas the Bhand Pather, a traditional form of theatre takes place.

The theatre excavates the lives of Rishis and ancient righteousness to enlight the firm faith in God. Which is also appreciated by the local people as it is the biggest source of entertainment as well as education for them. On the societal and political point of view, the uniqueness of this traditional art form brings the community together and fights for their very own rights.

Slowly as the growth has been rapid this form of theatre is spread across all the regions in North India and several neighboring countries.

Tradition and heritage are the most important foundation of any theatrical. The message behind each artform and performance is to communicate through a language which is easily understood by the local audience and educate them with vibrant themes and drama about their own culture. Swang is one such traditional theatre form performed in the regions of north India like Rajasthan, Haryana, Punjab, Uttar Pradesh, etc. 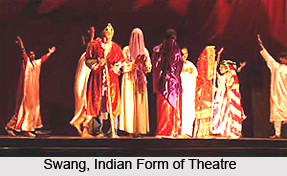 This form of theatre generally excludes the females so males in the group of 9 to 10 people elaborate on each character. If a necessary certain type of costumes and masks are to be used to give a real impact on their performance. The emphasis is dialogue oriented than movement oriented. It is commonly a style which mimics other characters and in a way also educates the audience with their influential plots. Exfoliating the themes of morality and human behavior this form of traditional theatre is still marching on the Indian cultural roots.

Just like several other forms of theatre Nautanki is the most common one. Originated in North India, this form of performing art is most interactive and shove the unrealistic characters into a real dramatic vision. Offcourse, music, dance, and acting are the roots of it. Mostly the historical plays and scripts have been performed in a theatrical way to entice the healthy role of each character in history. 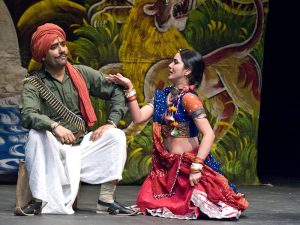 The whole scenario creates a rough image of time and storyline which needs to performed by the artists. This excavates the cultural bravery with past characterization. Encouraging patriotism and nationality, this all the while playing an important role, using several types of backdrops and costumes. Also, each character is inspired by the scriptures and dialects of Vedas and Puranas.

In the modern form of Nautanki theatres, plots, and themes inspired by cinema and political influence are being performed. Which is very interacting and creating awareness in the society for all kind of audiences.

A form of devotion Raasleela enacts the traditional and exclusive life of Lord Krishna. According to Indian history, three significant Vishnu Bhakti saints Ghumand Dev, Hitharivansh, and Narayan Bhatt are believed to have created this folklore of Raasleela based on traditional customs and Kathak dance form.

IIn the regions of Delhi and Vrindavana with the help of several stories about Lord Krishna, some groups of amateur performs this form of theatre. Mostly the love towards their diety the group of people plays Lord Krishna’s life in several acts.

Instruments like Sarangi, hand drum, and harmonium are used to show the traditional devotion of their region. The whole performance is a dance performance in the form of Kathak dance form, which is of the most important part of Lord Krishna’s lifestyle. The whole performance lasts longer than a normal dance performance as the whole storyline is based in one show. There are types of Raasleela’s which are being performed either in the theatre or on the streets. Raasleela is one of the most important styles to show Krishna’s affection for Radha and henceforth devotion for Krishna.

The coordination in the tradition and culture, to reflect the ritualistic act for Goddess Amba in the Gujarat state of India. The theatre is mobile, as each member of the group has to move across the villages and towns to perform the theatre. It is a subtle social criticism followed by dance and music. Also, it adds a little humor to the performance which becomes a source of entertainment for the audience. Instruments like bhungal, pakhaawaj, rabaab, sarangi and manjeera are being used to create a dramatic form of entertainment.

The traditional form of theatre originated in Maharashtra. Performed in the courts of Peshwas in 18th and 19th-century Tamasha still reigns in its peak time. Enhancing the feministic aspects, the lead performer is a female followed by musicians and dances. The folks of Maharashtrian diversity is performed in the form of exclusive dance and drama. The character plays a distinctive role with some intricating gestures and the region’s classical dance “lavani” and music. The joy of life and celebration is performed in this form of art, makes the most simple yet beautiful gestures of rural life. 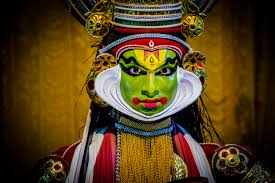 A temple art form of Kerela, performed in a series of eight days inspired by the poem ‘Geethagovindam’ which has eight parts. As devotion to Lord Krishna, the whole play consists of the stories of birth and lifestyle of Lord Krishna.

Types of eight plays in Krishnanattam are: 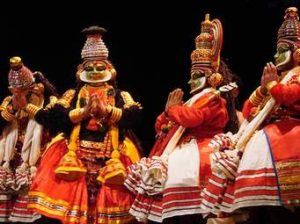 With a troupe of at least 50 to 60 people, the play is been performed. All are the male characters and the female part is also performed by distinctive male characters with the help of costumes and gestures in a duration of 3-4 hours.

The dance of God found in Kerela. The state of Kerela has always been the muse of art and music, this is one amongst the greatest artforms as well. Welcoming the spiritual blessings of their ancestors and celebrating life’s beautiful treasure Theyyam plays a very important role in the lives of its people. In the form of historical stories and vivid aspects of its culture, the state of Kerela celebrates it like a festival. Empowered by the gratitude for their Gods and beliefs each artist pays a strong and great tribute with their role. Heroic performance with dramatic costumes containing, headgears and masks with a touch of heavy makeup, Theyyam is season’s greatest and colorful performance presented by local people of Kerela. 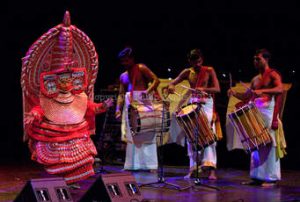 Another one of the most famous and intense forms of theatre performed by the gestures and eye movements. India’s most intense theatrical dance form, a  Masterpiece of the Oral and Ephemeral Legacy of Humanity. Koodiyattam is generally performed and practiced in temples in the Southern Regions of India; such as Kerela.

Koodiyattam is all about gestures and slight movements of the body, which helps to extemporize the acting of the performers. A sacred demonstration of this form of art is to be shown by the performers. Their belief is that while performing this the soul connects to that divine and spiritual world, hence each one is completely lost in playing their characters. This makes the greatest difference and importance. Also focusing on the sacred meaning this art form defines the significance of nature and their holy deities.

Originated in the state of Karnataka, Yakshaganna is one other sacred form of theatre storytelling. Under the beliefs of Puranas and Mahabharata Yakshaganna is a sacred devotion towards Lord Krishna and Lord Vishnu. With the help of scriptures and Puranas, the stories have been put out in some unique and peculiar way where nature plays an important role. With the help of stong figurines and features, the man plays both feminines as well as masculine characters. A fusion of classical dance and music paying a huge debut to Indian Gods and hidden treasures of nature. Their belief is to restore the sacred powers of their ancestors and holy Gods in the treasures found in Mother Nature. 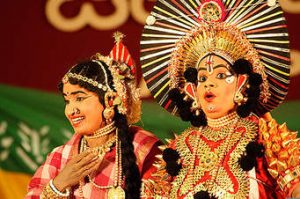 An epic form of art and cultural musing in the state of Tamil Nadu. Influenced by the epical and classical Sanskrit drama it is generally performed in open and in temples. It is mainly a street play and is performed to ameliorate the rain Goddess Mariamman. In the form of a cycle, the play is divided into eight segments displays the lifestyle of Draupadi a holy character from Indian epic Mahabharata. All through the performance, the artists will wear colorful and heavy costumes to describe the relevant characters of the story. 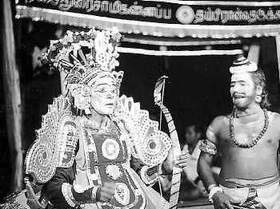 All around the corners of diversity, the country has many more small and big traditional theatre forms performed by the native and talented artists of the country. For example; Jatra, Dashavataar, Ankiya Naat Bhaona are some similar examples of theatrical plays performed in the various parts of the country.

Each play shows and reflects the historical lifestyles in the forms of stories and narrations. Each play links to the other in the form of mutual beliefs, devotion and sincere efforts to bring it out in front of the audience. Carrying around the legacy of sacred Indian dynasty, these theatricals play a significant role in the history of the country.

Continuing the word of war with the creativity and emotions the Natyashashtra has influenced many countries around the world. Lifting up the existing innocence and age of new generation, the art, and the lost civilization conquered the world with its devotion and change.

Moreover, the lifestyles will always be influenced by the traditional aspects, and this will drive the upcoming civilizations and many more generations to see the best of our history to offer.