Tulasi plant is one of the most revered plants in India. Tulasi in Sanskrit means “unmatched” or “incomparable”. Tulasi is a symbol of purity. Tulasi is considered as the queen of herbs.

Tulasi is known as Basil in English. Tulasi is also known by other names such as Manjari, Tulshi and Trittavu.

Description of the plant

The plant grows to a height of 75- 90 cms. Its leaves are oval shaped and generally grow upto 5 cm in length. 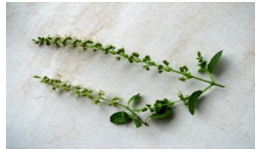 During the Samudra Manthan or the churning of the Ocean, Dhanvantri (the divine medico) comes up from the ocean with Amrita (the nectar) in his hands. Dhanvantri sheds tears of joy and when the first drop of his tear fell in the Amrita, it formed Tulasi. Tulasi thus emerged during Samudra Manthan.

There is also a mention of Tulasi in Rig Veda.

Dharmadhvaja* undertook a rigorous penance to please goddess Mahalakshmi. Mahalakshmi who was pleased with his penance was born as his daughter. 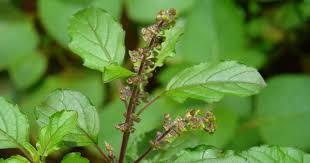 Tulasi was born to King Dharmadhwaja and Madhavi. Goddess Mahalakshmi entered the womb of Madhavi and after a hundred years, Madhavi gave birth to a daughter. The child looked very pretty as a matured girl at the time of birth. She was named as “Tulasi” meaning matchless. (Tula means match). From a very young age, Tulasi was often engaged in the worship of Lord Maha Vishnu. She went to Badarikashram in Himalayas and undertook a rigorous penance seeking Lord Maha Vishnu as her husband. She did the penance for twenty four thousand years surviving only on fruits and water. She continued her penance for another thirty thousand years eating leaves only. Then she did penance for another forty thousand years surviving only on air, and another ten thousand years without eating anything. Lord Brahma pleased with her penance appeared and asked her the intention of doing such a rigorous penance. Tulasi said that she wanted Lord Maha Vishnu as her husband. Lord Brahma said that she would marry the demon Sankhachuda* and later become the wife of Lord Maha Vishnu. Lord Brahma also said that, at the time when Tulasi would leave earth, a divine part of Her body will remain on earth in the form of a plant and be known as Tulasi. The Tulasi plant will be very dear to Vishnu and all worship without Tulasi leaves would be ineffective and incomplete.

Sankhachuda* Sankhachuda was Sudama, in his previous birth. Sudama, the cowboy was a part of Lord Krishna, but due to Radha’s curse was born as a demon on earth. 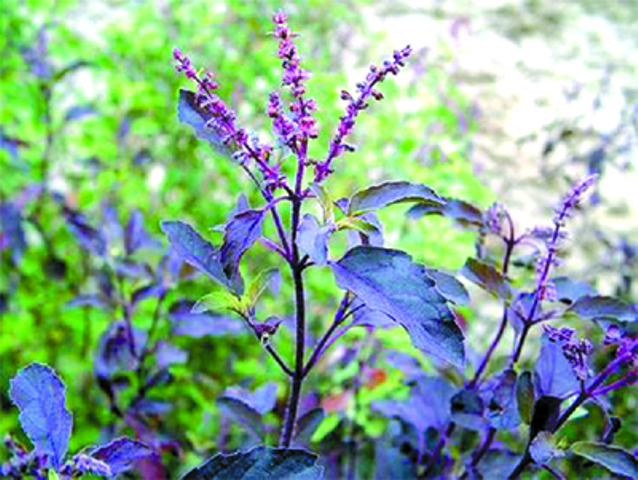 Sankhachuda did penance at Badarikashram and obtained Vishnu Kavacha. He had undertaken the penance with the objective of marrying Tulasi also. Lord Brahma blessed him with the boon that the demon would die only when his Vishnu Kavacha was removed and when his wife lost her chastity. Then Sankhachuda met Tulasi and got married to her. Sankhachuda loved his wife dearly which made even the devas jealous of Sankhachuda. Sankhachuda who was arrogant of his powers created havoc on the devas. Devas sought Lord Brahma’s and Lord Shiva’s help to get rid of the demon. All of them approached Maha Vishnu and sought a remedy. Maha Vishnu sent Lord Shiva to kill the demon. Sankhachuda left Tulasi alone at home and went to fight Lord Shiva. Meanwhile, Lord Vishnu disguised himself as Sankhachuda and engaged in amorous acts with Tulasi. Tulasi suspecting the demeanour of Sankhachuda rose to curse him. She cursed Lord Vishnu in the disguise of Sankhachuda to be a Shaligram. (sacred stone). At that moment, the Lord revealed Himself to Tulasi and said that her husband Sankhachuda would be killed by Lord Shiva and thus would have got rid of the curse of Radha. It was time for him to go back to the spiritual abode of Goloka. He asked Tulasi (who always wanted Lord Vishnu to be her husband), to abandon her body and accompany Him to Vaikunta to be His wife.

Lord Vishnu said “Your body will decay and become a holy river named Gandaki; your hair will become the Tulasi plant, the leaves of which will be held sacred in all the three worlds.”-  Brahma Vaivarta Purana, Prakriti Khanda, Ch 21 & 22.

There is also a mention of Tulasi in the stories of Meera and Radha immortalised in Jayadeva’s Geeta Govindam. 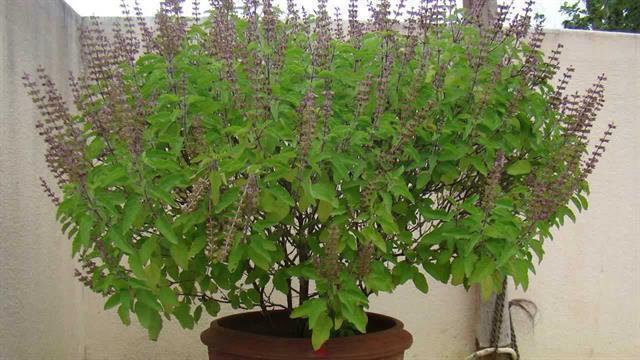 Tulasi has been mentioned in Charaka Samhita, an ancient book on Ayurveda. Tulasi leaves have anti fungal and anti bacterial properties which makes the entire plant a store house of medicinal properties. Thus in Ayurveda, Tulasi is used extensively in the treatment of several ailments. Some of the benefits of using Tulasi are as follows: 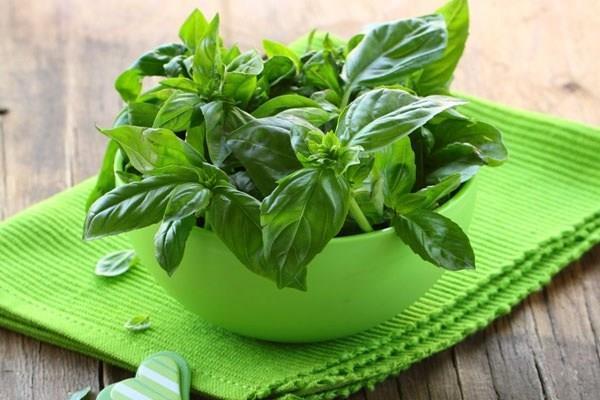 The bark of the plant is used to ward off negative energy. Bracelets or necklaces made out of Tulasi beads have physical and medicinal properties.

Tulasi plant is the most auspicious plant and most dear to Lord Krishna. The plant, leaves, roots, twigs all are worshipped. The soul of the dead whose dead body is cremated using dried Tulasi twigs will reach Vaikunta. Even the greatest of the sinners (sins of a crore of Kalpa years; 1 Kalpa is a day of Lord Brahma) would be absolved of their sins if at the time of cremation, Tulasi twigs are placed in the funeral pyre.

According to Padma Purana, if one smears the Tulasi leaves paste on one’s body and worships Lord Vishnu even for a day, he would get the benefit of a hundred ordinary worships and also the benefit equivalent to donating a hundred cows. (godhana). If a light made of Tulasi stick is burnt for Lord Vishnu, it is equivalent to lighting several lakhs of lights for the Lord. If a person leaves his body while wearing a necklace or a bracelet made of Tulasi beads, then all his sins will be absolved and he will reach Vaikunta. While performing a Yagna, if Tulasi twigs are used in the Yagna, he will reap the benefit of performing one Agnihotra Yagna for each grain offered in the fire. Anyone who worships the Lord everyday with Tulasi leaves will reap the benefit of a hundred thousand horse sacrifices. All the offerings to the Lord are incomplete without a Tulasi leaf. Every bit of the Tulasi plant, the bark, leaves, roots, twigs, trunk and the shade of the plant are spiritual.

A household which has the garden of Tulasi plants gets the benefit of all charities and of one hundred sacrifices.

Lord Krishna along with other demi gods resides with Tulasi Devi. In Kali Yuga, who ever prays or sings Kirtans of Tulasi will attain Krishna’s abode.

According to Skanda Purana, just by touching the Tulasi plant, one becomes pure.

In the story of Sri Krishna Tulabaram, Satyabhama, the queen of Lord Krishna prided herself about Sri Krishna’s love for her. On the other hand, Rukmini, the principal wife and queen of Sri Krishna was a very humble and devoted wife. Once Sage Narada tricked Satyabhama into performing a vrata (ritual), wherein Satyabhama would give away Lord Krishna in charity to Narada and reclaim the Lord back by weighing him in wealth. Satyabhama, accepted the vrata, gave away Lord Krishna in charity to Narada, and when she tried to weigh Lord Krishna by using all her wealth, the scale did not balance. But when Rukmini placed a leaf of Tulasi on the wealth, the scale balanced perfectly indicating the depth of her devotion and the purity of Tulasi. 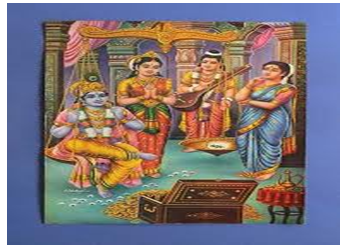 Tulasi is offered the 6th place among the eight objects of worship in the consecration of a Kalasha.

Karthika masa (Oct- Nov) is an auspicious month for the worship of Tulasi. Ghee lamps are lit in front of the Tulasi for the entire month. Worship of Tulasi during Karthika Masa along with signing Her hymns will give immense benefits to the worshipper.

According to Skanda Purana, the wedding of Tulasi with the Shaligram (sacred stone, symbolising Lord Vishnu) is celebrated in the month of Karthika on the twelfth day of the waxing moon. (Shukla Paksha Dwadashi). On this day, the Tulasi pot is decorated with mango leaves, a twig of Amla (symbolising Sri Krishna) is placed beside the Tulasi twig in the same pot and Puja is performed. Lamps are lit on five gooseberries and Aarathi is performed to Tulasi and Sri Krishna.

The festival also marks the end of Chaturya masa and the beginning of the marriage season.

The Tulasi Manas Mandir at Varanasi is a temple where Tulasi is worshipped along with other gods and goddesses.

Tulasi leaves should not be plucked at sunrise, after sunset, noon, night or in the state of impurity, on Amavasya, or on the twelfth or the last day of the lunar month, or being anointed with oil just before bath. 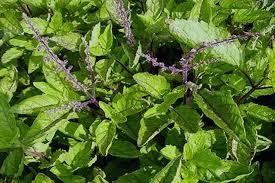 Tulasi is worshipped with the following eight names:

Vrinda (Vrinda [one who has thousands of sakhis or associates],

Vrinda-vani [one who never leaves Vrindavana],

Vishwa-Pavani [sanctifier of the whole world],

Pushpa-sara [essence of all the flowers],

Nandini [gives happiness to everyone],

Krishna-Jivani [the life and soul of Lord Krishna]

and Tulasi [one with an incomparable form]

Chanting of the above eight names while worshipping Tulasi Devi is equivalent to performing one Ashwameda Yagna.

While plucking the Tulasi leaves, the following Shloka should be chanted and offered to Lord Krishna.

Meaning: “O Tulasi, you were born from nectar. You are always very dear to Lord Keshava. Now in order to worship Lord Keshava, I am collecting your leaves and manjaris. Please bestow your benediction on me.”

Following is the Prayer to Tulasi:

“I offer my repeated obeisance to Vrinda, Srimati Tulasi Devi, who is very dear to Lord Keshava (Krishna). O goddess, you bestow devotional service to Lord Krishna and possess the highest truth.”

‘I bow down to the Tulsi at whose base are all the holy places, at whose top reside all deities and on whose middle are all the Vedas.’

Tulasi leaves are not used in any culinary preparations as it is considered to be sacred. Its leaves are eaten raw after offering to the Lord.