Water The Source and Sustenance Ganga 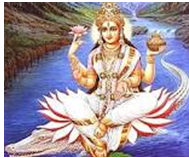 Just as food is necessary for survival science has shown that water is even more important for the sustenance of life. Water is the source and symbol of all life and existence on earth. It appears throughout the religion of every culture. It is considered to be sacrosanct and is used as a sacred symbol as in baptism in Christianity and breaking of fast during the holy month of Ramdan in Islam. Water has been mentioned for its therapeutic properties, physical purification and spiritual rejuvenation from time immemorial. In Hinduism the river Ganga is the symbol of sacredness and is worshipped by Hindus as they believe that bathing in her rivers leads to the wiping out of all sins and liberation from the cycle of birth and death.

King Sagara was one of the Kings of the Ikshvaku dynasty during the Satya Yuga.  He was an ancestor of King Dasharatha and Lord Rama. Once to prove his supremacy he decided to perform the Ashwamedha Yagna(horse sacrifice). Fearing the results of the yagna Lord Indra stole the horse and left it at the ashram of Sage Kapila when he was in deep meditation. Through magical powers King Sagara had acquired 60000 sons. He sent all these sons to look out for the horse. Since they found the horse at Sage Kapila’s ashram they thought he had stolen it and were preparing to attack him. At that moment the sage came out of his meditation and burnt them to ashes by his yogic powers. King Sagara then sent his grandson Amshuman to retrieve it. Amshuman followed the path and soon reached Sage Kapila’s ashram who was pleased with his respect and humility. But he informed him that only Bhagiratha who was to be born in a later generation could redeem the souls of the sons of Sagara by bringing the Ganga down to earth. It is said that many of the subsequent generations were involved in prayer and worship until Bhagiratha was destined to succeed.

Bhagiratha ascended the throne and set out to perform the arduous task set before him. He is said to have performed rigorous penance for a thousand years at the end of which Lord Brahma appeared before him pleased with his penance. When Bhagiratha requested him to bring down the Ganga Brahma asked him to propitiate Lord Shiva for only he could contain the destructive impact of Ganga’s strong fall on earth. Living only on air Bhagiratha then prayed deeply to Lord Shiva. After a year Lord Shiva pleased with his devotion and selflessness assured him of his help.

It is said that when Lord Vishnu as Vamana avatar liberated Mahabali he used three steps, the last which pushed Bali to the nether world, the first covered all of Earth and the second covered all of heaven. While taking the second step Brahma washed Lord Vishnu’s feet in his kamandalu or water pot and from this water pot Ganga was born. Thus she settled in Brahmaloka. It is said that she became vain and once when a gust of wind blew away Sage Durvasa’s covering she laughed and hence was cursed by him to become a river which would be used by all humans to bathe and remove their impurities and become pure. Meanwhile Brahma asked her to flow down to earth and though she scoffed at him she could not disobey him.

The calming of Ganga

She decided to fall arrogantly and sweep away the whole earth but when she came roaring down Bhagiratha began to pray to Lord Shiva to save the earth. Lord Shiva then appeared under the flow and captured her in his matted locks. Sanctifying and quelling the Ganga Shiva subdued her and she now flowed calmly and reaching the ashram of Sage Kapila freed the 60000 souls.

The Ganges plays a very important role in Hinduism and a number of stories have been mentioned in Hindu mythology. Her various tributaries fill the length and breadth of India purifying and uplifting mankind for generations to come.