In: Historic, Women Legends
With: 0 Comments 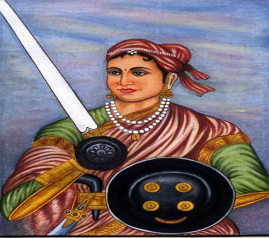 We have almost forgotten our ancient queens, since most of them have dedicated their entire life for the sake of India’s Independence. They have also safeguarded our Hindu temples in India by bravely fighting with the Mughal kings, and with their little army they bravely participated in the war and had won the big army of the Mughal emperors due to their tireless service. Some of the important queens who have lived a pious life, and who have considered our holy nation India as the sacred goddess Ma Shakti are:-

Out of these queens, Rani Tarabai who was the queen of Maratha Empire, and the daughter-in-law of the great Chatrapati Shivaji, had lost her husband at her teenage, and even then, she didn’t lose her hope, and fought bravely with the enemy kings, thus by saving the great Maratha Empire from the clutches of the Mughal Emperors. During her lifetime, she treated all of her army soldiers like her own children, and during the time of their death, she used to place them in her lap, and would cry like their own mother. She is such a kind of bold and affectionate lady, who can be considered equivalent to Ma Shakti Devi.

Likewise, the great queen Jhansi Rani who is also called as Lakshmi Bai, though had lost her husband at her young age, still, she fought bravely with the British people, and she has attained a brave death in the battle field at the age of 30. Some universities have been titled with her name in order to honour the holy mother Jhansi Rani.

Likewise Rani Mangamma who was the then ruler of Madurai have built temples, food shelters, and laid roads and water tanks,and treated her people similar to her children. She also fought bravely with the Mughal armies and honoured great saints like Guru Raghavendra, and highly respected them.

But most of us are familiar only with Mughal emperors like Akbar, Babar and Aurangazeb and we are also considering them as the celebrated heroes. Actually these kings were caused a great headache to our Indian kings and queens, and due to their enmity, most of our kings and queens didn’t even eat and sleep properly.

Ancient queens are considered as worshipful mother goddesses, and they contain great powers due to their chastity, generosity and adjustability. We must have to highly honour them by the way of reading their life history, and by the way of offering our whole heartedly thanks to them. Due to their selfless nature, we are able to properly breathe, and we are able to safely reside in our homes and we are also able to eat our food and sleep at our homes peacefully. If possible, we can keep a laminated picture of these pious queens in our puja room, and can perform puja to them regularly, similar to performing puja to other deities, in order to get their blessings also in our life.