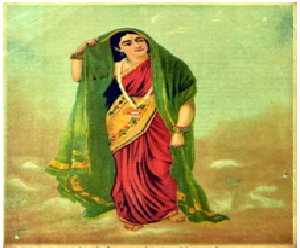 Hema served as a celestial dancer in the court of Lord Indra, and her details were mentioned in Ramayana. She was married with Maya, and  they had two sons, Mayavi and Dundubhi, and a daughter Mandodari, consort of Ravana.    After giving birth to them, she returned to heaven. Apsaras Hema lives in the Indra Loka since from the first Satya Yuga, she contains great powers, and her close friend was Swayamprabha who was also a celestial dancer. Lord Indra had gifted a magical cave to Hema, and due to the request of Hema, Swayamprabha looked after that cave.

When Lord Hanuman and other Vanaras were searching for Mata Sita during the Treta Yuga, they saw the magical cave, and entered inside the cave, met Swayamprabha, had their food and water, and then went outside the cave, and started their journey in search of Mata Sita. Later Swayamprabha also went to heaven, and in course of time, after getting the permission of Hema and Indra, the magical cave was occupied by some sages for doing meditation. In that cave, food items like fruit juices, fruits, milk and curd are available at any time, and the food items would never diminish. Due to that facility, sages were peacefully done meditation at that place.

Celestial dancers are also called as Apsaras, and they are the special creations of Lord Brahma. They contain great powers, and even though they keep affair with others, they would never lose their chastity and holiness, and they are considered                    as the worshipful mother goddesses. Apsaras like Ramba, Urvasi and Menaka, are still living in the heaven and performing dances, in order to please Lord Indra and the divine devas. They are also having the capacity to grant boons to us, since they are living in the Indra loka. They are well mannered and good natured women, and they never utilized their powers unnecessarily.