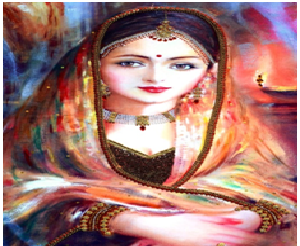 Suniti is the mother of Dhruva and the consort of King Uttanapada, the son of Lord Manu. The king’s second wife is Suruchi, and their son is Uttama. The king had mainly shown his love and affection only to his second queen Suruchi, and hence neglected his first wife Suniti and her son Dhruva. Due to that Dhruva was very much upset, and as per the advice of his holy mother Suniti, he went to the forest and performed severe penance on Lord Vishnu, and got various boons from him.

After finishing his penance, he went to his kingdom, and there he was warmly welcomed by his father Uttanapada, mother Suniti and step mother Suruchi and her son Uttama. After some years, king Uttanapada crowned Dhruva as a king for the kingdom, and he went to the forest, performed meditation on Lord Vishnu and attained salvation.

Dhruva’s mother Suniti stayed with him, and gave good advices and told stories from the holy texts, and took care of him properly. Dhruva ruled his kingdom in a prosperous manner for a period of 26,000 years, and after that, he has become a popular Dhruva Star, and his mother Suniti is also living with him in the divine star world.

Mata Suniti is a pure, chaste and a holy woman who lived her life as per the principles of Dharma, and served as a dutiful wife to her husband, Uttanapada, even though she was disliked by him. With respect to chastity and holiness, she can be compared similar to Bhakta Prahalada’s mother Kayadu. Suniti is an ardent devotee of Lord Vishnu and due to that, she is able to still live with her son Dhruva in the Dhruva Loka, even after the passage of many millions of years.

Similar to her son Dhruva, there is no end for her, and she would be permanently living in the Dhruva Loka, even during the times of the destruction of the universe.

Let us worship the holy mother, Mata Suniti and be blessed.