In: Itihaas, Mahabharat
With: 0 Comments 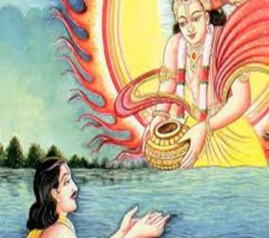 Akshaya Patra also known as Amudha Surabi is a holy vessel, which contains unlimited food in it, and the details about the sacred object were mentioned in Mahabharata. This marvellous vessel was given to Yudhishthira by Lord Surya Bhagavan in order to obtain enough food from the Vessel during the times of hunger.

When the Pandavas were in exile in the forest, many big and small people began to meet them, in order to extend their full support to the Pandavas. At that time, Pandavas were very much worried to offer food to the innumerable guests, since in the forest, only limited food items were available. As per the advice given by Lord Krishna, Yudhishthira sincerely prayed to Lord Surya, and obtained the divine Akshaya Patra, which provides limitless food. Hence with the help of the divine vessel, Akshaya Patra, the Pandavas and their consort Draupati had provided proper food to the visitors, and removed their hunger.

Once, the great Rishi Durvasa, who was popularly known as the “ANGER RISHI” went to Hastinapura, and there he and his disciples were properly served by Duryodhana, and when the Rishi decided to grant him a boon, Duryodhana had asked the Rishi to visit the Pandavas in the forest in order to eat food which was supposed to be offered by the Pandavas.

Hence as per the request of Duryodana, Durvasa and his disciples visited the Pandavas in their Ashram. But at that time, Ma Draupati had consumed that day’s food from the Akshaya Patra, and she had washed the vessel also, and hence she could get the unlimited quantity of the food from the divine vessel only on the next day. During that difficult situation, Draupadi began to pray to Lord Krishna and sought for his help. Krishna immediately appeared before Draupadi and ate a small piece of rice which was still seen sticking in the vessel. As a result, since the great Lord Krishna had satisfied with the small quantity of food, Rishi Durvasa and his disciples had also got the feeling as if they were eaten a big feast, and due to that, they began to walk fast from that place, even without informing about their situation to the Pandavas and to Ma Draupati.

From this incident, we can knew, that whenever we call the Lord urgently and ask for his help, immediately he would lend his helping hands, and would sort out our problems, whatever may be, whether it is small or big!

Let us worship Lord Krishna with full of devotion and let us be blessed.