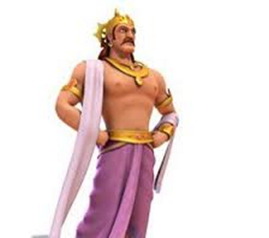 Chitravahana was the king of Manipura, his consort was Vasundhara, and he was the father of Chitrangada. Chitrangada was married with Arjuna, and their son was Babruvahana. Chitravahana though he ruled a small kingdom, he was very generous and a good natured person. He charged lower amount of tax, and didn’t give any difficulties to his people. His only daughter was Chitrangada, and hence he brought up his daughter like his son, and he had given training to her in all kinds of arts like handling of weapons, training of horses and riding of chariot etc.

When Arjuna visited the kingdom of Manipura, he first saw Chitrangada who looked very beautiful and she was dressed like a male person. She also convinced with the valour of Arjuna, and took him to her kingdom. Arjuna met Chitravahana at his palace, and he married with Chitrangada, and after staying there for a few days in the palace, he left Manipura and went to his place. Through Arjuna, he came to know about the significance of Lord Krishna, and worshipped him wholeheartedly. He brought up his grandson Babruvahana in a proper manner, and trained him in all fields. He was a friend of the Gandharva King Chitrasena, and he used to visit the Gandharva Loka frequently. Chitravahana was mentioned in the Mahabharata as a noble and a righteous king, who looked very handsome and he was always acted kindly with his people.

In his previous birth, Chitravahana was a Gandharva price, and due to his mischievous acts, he was cursed by a sage, and as a result he was born in the earth as a human king. After the end of his life, he had relieved from his curse, and went to the abode of Gandharvas. There are lot of noble characters in the Mahabharata like Krishna, Pandavas, Vidura and Bhishma. Similar to them, Chitravahana was also a pious king, and he didn’t commit any sins in his life.