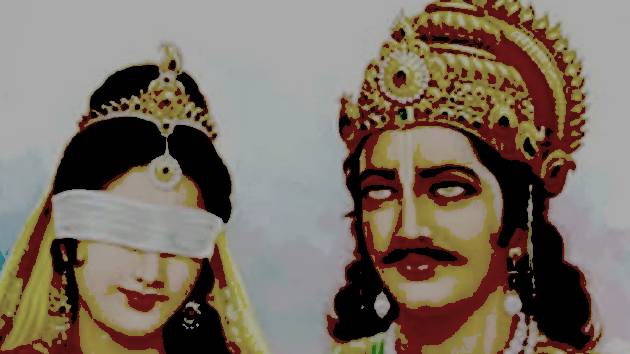 INTRODUCTION
Gandhari plays an important role in the Mahabharata. She was a princess of Gandhara and the wife of Dhritrashtra, the blind king of Hastinapura, and the mother of the Kauravas. She was well known for her chastity, purity and holiness, and praised as a pious woman among the three worlds in the heaven as well as in the earth.
She acts as an example for others, which in this modern day life, we can’t even imagine such a great sacrifice which she has done that after marrying the blind king Dhristrashtra, she also remained as a blind woman by tying her eyes in a cloth in order to share the sufferings of her husband. As soon, as she has tied her eyes with the cloth, the demigods were poured flowers on her by praising her greatness and also blessed her.
Gandhari is regarded as a GEM among the woman. She also gave suitable suggestions to her husband for observing righteousness in the life. She had lost all of her hundred sons during the Mahabharata war. She also cursed lord Krishna that his Clan would be destroyed within a short span of time. At her older age, she went to the forest and stayed with her husband in a hermitage by eating only fruits and vegetables. After her death, along with her husband Dhristrashtra, she reached the divine abode of Lord Indra, the Indra Loka.
Let us worship the holy mother and be blessed.
“OM SRI GANDHARI THAYE NAMAHA”
“JAI KRISHNA”
WRITTEN BY
R.HARISHANKAR