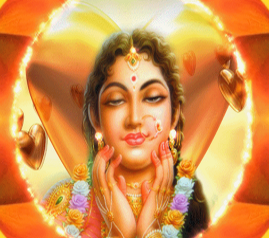 Karenumati was the daughter of the king Shishupala of Chedi, and she was the sister of Dhrishtaketu. Her husband was Nakula and their son was, Niramitra. After Nakula, Niramitra ruled the Madra Kingdom. Karenumati was a pious and a chaste woman, who served as a dutiful wife to Nakula, one of the Pandavas. She had showered her love and affection on all other Pandavas, and she treated them as her own brothers. She had kept sincere bhakti on Lord Krishna, and she considered him as an avatar of Lord Vishnu.

When Yudhishtra and other Pandavas went to the forest during their exile term, she has expressed her desire to join with them, but it was Lord Krishna who stopped her, and asked her to stay in the palace of her brother Dhrishtaketu. She has also seen the Viswaroopa Darshan of Lord Krishna, when he has shown it in the palace of Kauravas. She cordially moved with Draupati, and also served her sincerely. Similar to Draupati, who is an aspect of Ma Shakti Devi, she is also an AMSHA of Ma Parvati, who was born in the earth, in order to have the darshan of Lord Krishna. Karenumati was mentioned in the Mahabharata as a beautiful, chaste and a good natured woman, and she is described as a GEM among the queens. She used to provide food to the poor people on a daily basis, and she had shown mercy on each and every living being in the earth. After the end of the Kurukshetra war, when Yudhishtra had become the king of Hastinapura, Nakula ruled the kingdom of Madra, and Ma Karenumati became the queen for that kingdom.

She was very much liked by Rishi Vedavyasa, and as a result, she has got various boons from him. When Nakula and other Pandavas went to the heaven, Ma Karenumati also joined with them, and it is believed that still now she is residing in the heaven by enjoying all sorts of heavenly comforts.