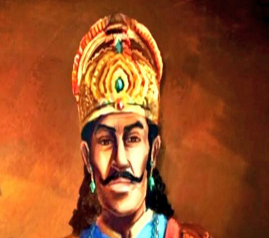 According to Mahabharata, Kunti-Bhoja was the foster father of Kunti. Since he ruled the Kunti Kingdom, he was known as Kunti-Bhoja. Kunti was the daughter of King Shurasena but she was adopted by Kuntibhoja since he had no children. Kuntibhoja considered her as his own daughter and loved her very much. Kunti was very beautiful, pious and good natured woman, who was married to Pandu. Kunti-Bhoja is described in the Mahabharata as a great warrior king, and a generous person, and he was mentioned as a king with golden hands.

During his period, all the crops were proper grown, and all the people in his kingdom were lived happily and peacefully. He didn’t charge higher amount of tax, and he has constructed lot of temples, guest houses and food shelters all over his kingdom. He maintained cordial relationship with the kings, who lived nearby his kingdom, and he didn’t unnecessarily fight with the kings in order to express his bravery. Though he was elder than Lord Krishna, he considered him as an avatar of Lord Vishnu, and gave proper respect to him. Once the great sage Durvasa visited Kuntibhoja, and he wished to stay in his kingdom for a few days. The king deputed his daughter Kunti to properly look after the angry sage Durvasa. Kunti wilfully served Rishi Durvasa, and she served food in time, and also arranged for the puja material in time, and satisfied the needs of Durvasa during his stay in her palace. Due to the selfless service of Kunti, Rishi Durvasa was satisfied, and gave her the powerful boon of delivering noble children with the help of the Divine devas.

Kunti-Bhoja’s son was Visharada who had become a king after his father, and he was killed by Duryodhana during the Kurukshetra war. Most of the kings, who were mentioned in the epic Mahabharata, were very talented in warfare activities, and they were expert in all kinds of arts.