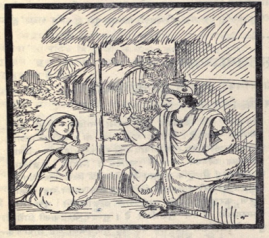 As per the great epic Mahabharata, Madri, was the sister of Shalya, and she was the princess of the Madra Kingdom. Once Bhishma met Shalya and asked him to arrange for the marriage of his sister to Pandu. Bhishma also gave him lot of wealth to Shalya during the time of marriage. She was the second wife of Pandu and her children are Nakula and Sahadeva.

Once while Pandu was hunting in a forest, he shot an arrow on a deer, but later he found that the deer was Rishi Kindama who tried to unite with her wife in the form of a deer. Pandu was very much worried for his mistake, but at the time of his death, sage Kindama cursed Pandu, that whenever he tries to sexually unite with his wives immediately he would die. Due to that curse, Pandu left his kingdom and lived as a hermit in an Ashram. Due to the curse of  Pandu, Kunti used the boon given  by Rishi Durvasa and as a result, she gave  birth to her three children Yudhisthira, Bhima and Arjuna from the Divine Devas, Lord Yama, Lord Vayu and Lord Indra. She also helped Madri, to deliver two noble sons, Nakula and Sahadeva, from the divine physicians Ashwini Kumaras. One day, Pandu tried to unite with his wife Madri, but due to the curse, he had died immediately, and Madri also entered into the pyre of Pandu and died.

After her death, Ma Kunti affectionately took care of the children of Madri, Nakula and Sahadeva, and she treated them as her own sons. In the Mahabharata, Ma Madri was mentioned as a beautiful, chaste, pious and a good natured woman, and she dutifully served her husband Pandu throughout her life time. Since she could not bear the death of her husband Pandu, she immediately died. After their death, both of them went to the abode of Lord Indra, the Swarka Loka.