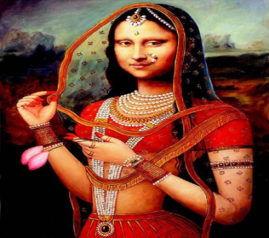 Malini was the maid of Draupadi, and she was married to a brave soldier Pralanksena. They had a son Nakusha, and he served as the security guard of Drupada. Her husband and son were killed by Drona during the Kurukshetra war. Malini faithfully served Ma Draupadi, during her tough time also. She was mentioned in the Mahabharata as beautiful, pious and chaste woman, who considered Ma Draupadi and the Pandavas, as her relatives, and worshipped Lord Krishna sincerely. After the death of her son and husband, she has fallen into the pyre of her husband, and attained salvation.

Malini used to tell wonderful stories from the Puranas to Ma Draupadi, and she also used to beautify her with various flowers and golden ornaments. When Pandavas went to the forest during their exile term, Malini also went along with Draupadi, and consoled her through her lovely speech.

Ancient maid servants were very clever and they used to do lot of work without any hesitation. They used to take care of their masters similar to their parents, and they would never use harsh words on them. During the times of marriages, kings used to gift several male and women maid servants to the bridegroom. When Lord Rama was married with Ma Sita, the Mithila king Janaka had gifted lot of maid servants to Lord Rama, and they permanently stayed in Ayodhya and wilfully discharged their duties.

Divine avatars like Rama, Krishna, Prahalada and Dhruva have kindly treated the maid servants, and they didn’t consider them as slaves. They didn’t give extra work for them, and they have never pressurised them. All of these divine avatars, considered females as the incarnations of Ma Shakti Devi, and treated them similar to their daughters. That’s why still we are praising them, and worshipping them. As per our Hindu Dharma, those who give good respect to women would get peace of mind permanently, and they would attain all kinds of prosperity in their life.