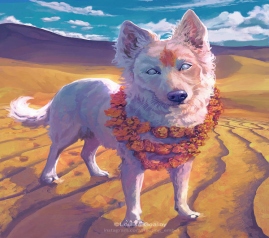 As per our Holy Hindu Puranas, Ma Sarama is considered as an immortal female dog who lives in the Swarka Loka, also called as Indra Loka. She was mentioned in the Rig Veda, and once she helped Lord Indra to recover the divine cows which was stolen by the demons. She is a friend of Lord Indra, and it is believed that she still lives in the Indra Loka. She was mentioned in the Mahabharata and also in some other Puranas, as a holy female dog, who contains a bright face, and she is a brilliant dog.

Once, the great king Janamejaya performed fire sacrifice. During that time, the son of Sarama, went nearby the Yaga Sala, and he had wagged his tail. Janamejaya and others were disliked with the dog, due to his presence at the Yaga Sala. Hence he and his attendants were beaten the dog with a stick, and drove it away from that place. As a result Ma Sarama, cursed Janamejaya that he is going to suffer in the future. As a result, he has conducted a fire sacrifice in order to kill all the snakes in the world. But however, after some time, he was stopped by Rishi Astika, and he discontinued the fire sacrifice. But since he has already killed thousands of snakes in the fire sacrifice, he has suffered from leprosy. Then Janamejaya went to the present day Kerala, and worshipped Lord Krishna, who appears in the form of Guruvayurappan, and after some time, through the blessings of Lord Krishna, he had got relieved from the curse which was given to him by Ma Sarama.

From this incident, we should understand that dogs are holy animals, and at any cost, they should never be harmed by anyone. If anyone harms any dog, then it would be immediately noticed by Ma Sarama, and she would curse them, and due to that, they would suffer from lot of problems in their lives.