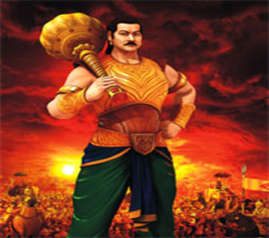 In the epic Mahabharata, Uttamaujas was a talented warrior of the Panchala Kingdom. In Mahabharata, he is described as a good looking and sweet natured person. The Panchala king Drupada considered him like his son, and he appointed him to act as a bodyguard to Arjuna. He well protected Arjuna, and acted as a protective shield to him. Along with his brother Yudhamanyu, he participated in the Kurukshetra war, and he stood on the side of the Pandavas.

He was cunningly killed by Ashwatthama during the night. Being a brave and a disciplined warrior, after his death, he has attained the abode of Lord Indra, the Swarka Loka. Uttamaujas was excellent in handling of weapons during the battle field, and he contains talent equivalent to Bhima and Balarama in fighting with the mace weapon. Uttamaujas was a noble person, and though he was born as a Kshatriya, he adopted the path of dharma, and he followed the advices of Lord Krishna. He respected Ma Draupati and the other consorts of the Pandavas, and they were also shown their great affection on him.

Ancient soldiers also act as a body guard for their kings, and they would affectionately move with them. Even if they lose their lives in the hands of their masters, they would never get angry on them, but they wilfully accept their death. Due to the obedience, honesty and sincerity shown towards their masters, we can describe them as the great devoted soldiers. Even if they are captured by the enemy kings, they would never disclose any secret information about their kings, and would maintain strict silence, even if they are tortured by their enemies. Similar to worshipping ancient chaste women, we can also worship the ancient soldiers, who have won the hearts of millions and millions of people through the selfless service rendered by them for their kings and for their motherland.