According to the Jain philosophy, Lord Mahavir, also known as Vardhamana, was the twenty-fourth and the last Jain Tirthankara (saviour of the spiritual teacher).  It is believed that Lord Mahavir was born in the early part of the 6th century BC in a royal family. He was born on Chaitra Trayodashi as per Vira Nirvana Samvat, which is March/April in Gregorian calendar. The day is celebrated globally by Jains as Mahavir Jayanti.

Mahavir grew up as a prince but at the age of thirty, Lord Mahavir decided to abandon all the worldly pleasures and left his home and family to live an ascetic life. He undertook severe fasts and bodily mortifications, meditated under the Ashoka tree and discarded his clothes.

Mahavir spent the next thirty years travelling barefoot around India propagating the eternal truth to the people that he realized himself. The ultimate objective of his teaching is how one can attain total freedom from the cycles of birth, pain, misery, and death to achieve the permanent blissful state of one’s self. The blissfulness that we also know as the absolute freedom or Moksha.

Mahavir explained that from eternity, every soul is in the bondage of karmic atoms that are accumulated by good or bad deeds. Under the influence of karma, the soul is habituated to seek pleasures in materialistic belongings. This is the deep-rooted cause of self-centered violent thoughts, deeds, angers, hatred, greed and such other vices. These result in further accumulation of karmas.

This doesn’t mean believing what you’re told, but means seeing, things properly, and avoiding superstitions that get in the way of seeing clearly.

This means having an accurate and sufficient knowledge of the real universe.

This means to avoid doing harm to living things and freeing yourself from attachment and other impure attitudes and thoughts.

The Jain Agamas enumerate five vows which ascetics and householders must observe. These ethical principles were preached by Lord Mahavir:

The goal of these principles is to achieve spiritual peace, a better rebirth, or (ultimately) liberation. These teachings help improve a person’s quality of life.

Mahavira’s teachings were influential. According to Rabindranath Tagore, Mahavir proclaimed in India that religion is a reality and not a mere social convention. It is really true that salvation cannot be had by merely observing external ceremonies. Religion cannot make any difference between man and man—Rabindranath Tagore

Lord Mahavir devoted his entire life in preaching spiritual freedom. At the age of seventy-two, Lord Mahavir attained Nirvana in 527 B.C which means he became free from the cycles of birth and death. 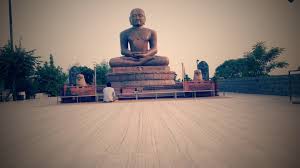