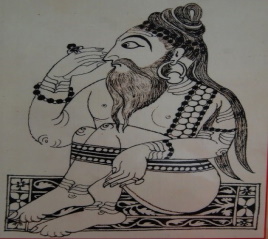 Kalyan Swami (1636–1714) was a sincere disciple of Shree Samarth Ramdas and they were united together with regard to the devotion of Lord Rama.

He was born at Kohlapur,Maharashtra a famous pilgrimage site of Goddess Mahalakshmi. His birth name was Ambaji. After his father attained sainthood at Kashi, he and his mother were lived in their relative’s home.

At a younger age, he travelled to many places and had been conducted various religious discourses in order to lead the society to the right path. He also visited many holy temples situated in india. His discourses were attracted by a huge number of his followers.

After some time, he has become the disciple of Shree Samarth Ramdas.

From a young age, he was the chief disciple of Sri Samarth Ramadas, who was a famous saint of Maharashtra. Although he was tested by his guru in many situations, he never failed and has become the closest disciple of Samarth.

He was a great scholar and an expert in all devotional texts and also well known in yoga and meditation.

He was a kind hearted saint and treated all of his devotees in a proper manner, and gave them his blessings, and also removed their sins through the grace of Lord Rama. He cured many dreaded diseases of his devotees, and also given them peace of mind.

Kalyan Swami died in 1714 in Osmanabad.

The Samadhi temple of Shree Kalyan Swami was constructed in Osmanabad.

He was a great devotee of Lord Rama and an obedient disciple of his guru Sri Samarth Ramadas. His teachings were well understood by everyone and he was the main person in promoting the importance of worshipping Lord Rama and chanting his Mantra. He was also a sincere devotee of Lord Hanuman, and wants to become like him with regard to Rama Bhakti. Let us pray to him and be blessed.