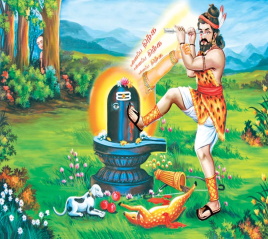 Kannappa was a great devotee of Lord Shiva. He was born on 3102 BC in Andhra Pradesh. He is considered as one of the 63 Nayanmars. It is believed that the great warrior Arjuna  took birth as Kannappa.

Kannappa Nayanar is also known as Kannappan, was born in   a   hunter family, in Andhra Pradesh. His wife’s name was Neela, and his birth name was Dinna.

Kannappa was a staunch devotee of Lord Shiva of SriKalahasti. Being a hunter, he worshipped in his own way. He also offered Lord Shiva the animal which he hunts. But Lord Shiva accepted his offerings in a kind manner,     since Kannappan was a great devotee of Lord Shiva. Once, Lord Shiva wants to test his bhakti. Hence on one day, Lord Shiva made one of the eyes of   Shiva linga to be filled with blood. On seeing that, without a second thought, Kannappa plucked his one eye out with one of his arrows, and placed it in the spot of the bleeding eye of the Shiva linga.  But he noticed that again other eye of the linga has also started oozing blood. Hence, he decided to pluck, his       another eye also. On seeing his great devotion, Lord Shiva appeared and restored his eyes. And he made him as one of the Nayanmars and from then onwards, he was called as  Kannappa Nayanar.

He never thought about losing his eye sight, and he immediately decided to lose his eye sight for the welfare of Lord Shiva. We can’t even imagine such a pure bhakti in this “KALI YUGA”. He acts as an example for others regarding his sincere devotion to god. We also have to try to read such great nayanmars history, and to cultivate the habit of devoting our attention towards god.

Kannappa, who was the great and mighty warrior Arjuna in his previous birth,    was able to show his kindness on god to such a great extent. He has become a Nayanmar and residing in Mount Kailash and doing a great service to Lord Shiva and Goddess MAA Parvathi. Let us worship him and be blessed.