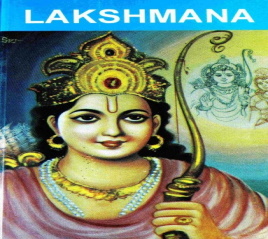 Lakshmana is the younger brother of Rama and also his companion as per the epic Ramayana.

Lakshmana is the twin brother of Shatrughna. He is regarded as the avatar of ADHISESHA, the divine serpent bed of Lord Vishnu.

Lakshmana and his brother Shatrughna were born in Ayodhya to Sumitra and King Dasharatha during Treta Yuga. Lakshmana also accompanied Rama towards killing the demons at Mithila as per the instructions given by the sage visvamitra. Lakshmana married Sita’s younger sister Urmila. And they had two sons. During the 14 years period of exile, Lakshmana left his wife Urmila and his children and joined with Rama.

He served Lord Rama and Mata Sita with much care and attention during the period of exile. He played an important role during the Ramayana war.

He also tried to protect Sita from the danger, by drawing the lakshman rekha(a line drawn by lakshmana which sita must not cross), when he went out in search of the golden deer, which sita wants to get it captured.

During the Ramayana war, he killed Indrajit who was one of the sons of Ravana.

After Rama was seated in the throne of Ayodhya, when he was a given an offer of becoming the crown prince, he refused the offer, and asked Bharata to be made as the crown prince.

Lakshmana also safe guarded Mata Sita in the forests from animals, and asked sage Valmiki to take care of her in his ashram.

Lakshmana is a holy man who served with loyalty and affection to his elder brother throughout in his life. He never thought about his own comforts, but always thought about Lord Rama and assisted him in his entire life.

He is a great avatar who served with utmost devotion and love to his elder brother Lord Rama. We can’t imagine such a great person in this today’s world. He was a dedicated brother and acted as a servant to Lord Rama who surrenders his entire mind and body towards doing service for him. He was also loved by the people of ayodhya for his kindness showed towards them, and for serving his brother in a proper manner.

He is a pious and a good natured person, who contains good knowledge in all the divine scriptures and also a master in all kinds of art. He contains wisdom, courage, boldness and spiritual power.

Though he was not punished, he went along with rama during the period of exile and looked after him and mata sita in a proper manner. The sincerity which he had shown to Rama and Sita cannot be forgotten by us.

Let us worship him and be blessed.