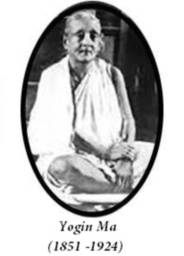 INTRODUCTION
Yogin Ma also known as Yogindra Mohini Biswas was the main disciple of the holy mother Sri Sarada Devi. She and her close associate Golap Ma were served in a remarkable manner to Mata Sarada Devi and also were the spiritual successors of Sarada Devi. Yogin Ma resided with the holy mother in Kolkata, and took keen interest towards spreading the principles of Ramakrishna Mission, and she also done many social welfare activities for the poor people with the guidance of Mata Sarada Devi.
Yogin Ma was born in Kolkata in the year 1851. She got married at her younger age, and since her husband was a drunkard, she left him and went to her mother’s house at Kolkata along with her daughter.
After some time, Yogin Ma met Sri Ramakrishna in his devotee’s house, and after spending several hours with the holy guru, she has considered him as her Guru, and clarified her doubts with regard to spiritual matters, and got peace of mind. She got the habit of reading the Hindu epics like Bhagavatham, Bhagavat Gita, Shiva Puran, Ramayana and Mahabharata. She mingled with Sister Nivedita in her writing activities, and helped her to publish lot of spiritual books. Sri Ramakrishna had appreciated her for her selfless service and blessed her.
After the death of Sri Ramakrishna, she had permanently stayed with Sarada Devi. Yogin-ma was a woman of perfection. Yogin-ma treated the other disciples of Sarada Devi as her friends and gave great respect to them. She frequently used to interact with Swami Vivekananda and used to discuss divine matters.
At her final stage of life, she stayed with Sarada Devi at Kolkata, and she died in the year 1924, at the Udbodhan House.
Let us worship the divine mother and be blessed.
“OM SRI YOGIN MA NAMAHA”
“JAI SRIRAM”
“JAI KRISHNA”
WRITTEN BY
R.HARISHANKAR