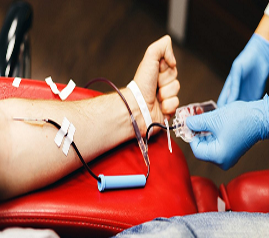 Among the various types of donations, blood donation is considered as the best donation, since it saves the life of the person, who loses his blood due to accidents and poor health conditions. Nowadays most of the people are wilfully donating their blood, in order to save the lives of the blood losers. Some Cinema actors and their fans are also conducting blood donation camps at various places of India. Some Political personalities are also explaining about the importance of giving blood donation, and insist the people to do such a Life Saving act.

Generally if we donate the blood to the victims, within a few hours, fresh blood would be generated in our body, and there is no need to worry about our health at all. In fact, if we donate blood regularly, we would get great punyam, since donating blood to the victims is considered as a sacred act. It is considered as a best donation even than that of food donation. In case of donating food, we are spending our money only, but in case of blood donation, we are giving a small quantity of our energy in the form of the blood to the victims. As per legend, once the great king Sibhi was willingly given his body itself to save a pigeon from an eagle. But now no one would do like that. But at least, we can do the best possible things in our life.

The great Lord Jesus Christ had sacrificed his own life by shedding his blood in order to remove the sins of the people. He is a kind, pure, pious and a noble person. Similarly lot of Hindu saints have sacrificed their life when they were forced by the ancient Muslim kings for conversion purposes. Daily lot of patients are dying for want of blood. By donating our blood, we can save the lives of many people and can Lit the lamps in their family, and their blessings would protect us like a shield. Hence let us donate our blood and save the lives of the victims, and can make them to smile for ever in their life.