Why #traders of #southMumbai support #congress candidate? It is not a very good news for bjp as something has gone wrong somewhere that #Gujaraticommunity and other traders have decided to support #Murli Deora- a congress candidate. It is unusual that they have openly stated in today’s newspapers and encouraging others to vote for the same guy.
I am just wondering why this is happening when every seat is important as we would like to see #Modiji to become #PM again with 400 seats.
Is it because of #demonetisation which has actually ruined many small and mid size traders. As they say 40% of workers from other parts of india have returned back due to lack of jobs. I feel it takes time to build the businesses again as #demonetisation wasn’t an easy task either. Or the traders couldn’t get their black money exchanged and they are still hoping that their old #currencies will get exchanged. It is also because some businesses wanted extra and unfair favours from #Modiji which he refused to give? Or some says that bjp is not in favour of businesses as they allowed #FIIs but didn’t give any levy to the indian business houses.
Whatever may be the reason, it is not too late. #NDA please look into it. We want all major business houses to be supporting #Modiji.
#NAMO #MaiBhiChaukidar #bjp #NDA Narendra Modi #NRI4NAMO 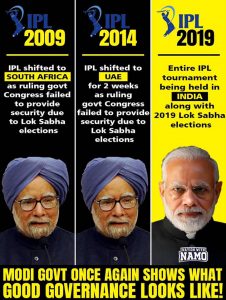