A new revised English version of Garud Puran has come out recently keeping in mind the need of contemporary Priests. This new in so many ways as it is the most authentic and also attuned to Vedic thought process. A large introduction to the book also helps to put the subject matter in perspective. 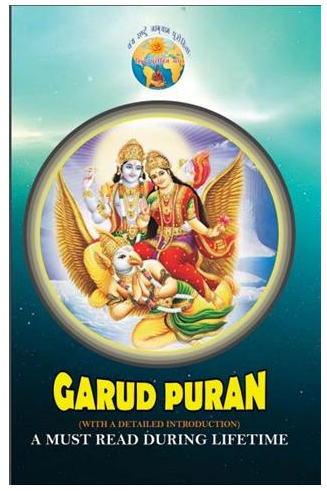 The existing version of Garud Puran which was compiled by the late. Mr. Naunidhi Ram, the priest of ruling family of Jhunjhunu state of Rajasthan has sixteen chapters. This version was published in 1888. He compiled this version mainly based on the “Pret Kalp” of Mahagarud Puran but few verses were taken by him from other sources like Gita, Vivek Churamni, Neeti shastra, Varaagya Shastra and other Puranans and it was named as Shaarodhaar. It has 1288 versus.
However, though it was good effort to prepare a brief version of “Pret Kalp” but it had a number of short comings. It had references which were , in a way, promoting very archaic and barbaric traditions like Sati, Caste system and so on. In fact the treatment of human being as an atom of Brahmn (not Brahma) makes it clear that each human is equal and divine. Therefore, there is no scope for discrimination based on caste and gender in Hindu Sanatan Dharma. It is extremely important to note that these were localised traditions which cropped up due to invasions during medieval period and are not part of Hindu Dharma. They developed during certain period of history and somehow penetrated into religious book.

Interestingly, even the word “Sati” does not appear in the entire Vedic literature. Similarly, the system of superiority and inferiority based on caste and gender is alien to Sanatan Dharama. There are also short coming in the existing addition of Garud Puran regarding understanding of context, meaning and philosophy. There has been misinterpretation of basic concepts like Mokshya, Sanshara, Punarjanm, etc. For example-the use of Putra in the scriptures has been used for son as well as daughter. This was basically due to limitation of language and not that it disregarded daughters. Similarly, the words like Brahamhatya, has been mis-interpretated as the killing of Brahmin though it denotes to killing of human beings. This type of shortcoming have since been attended in the present version.
Interestingly there are a number of references in the original Pretkalp which are on very relevant subject like environmental protection, healthcare, human action as to be seen as oblation and so on, which were left out in the previous versions, have now been incorporated in this edition. Some very important issues like emphasis on compassion, Daan, have been incorporated.
The efforts have been made to drop unrelated verses and replace them by more devotional, rational, contextual and relevant verses. Some of the key verses which are actually the soul of Puranas has since been incorporated in this version.

Efforts have been made to refer Vedic literature particularly the Versus from Grihyasutra, Gita and Upanishads wherever necessary to complete the Darshan part of it to ensure better understanding of subject.
This version would also help in bringing better understanding of Sanatan Dharma and also would bring harmony, cohesiveness, compassion concerned for nature, concerned for other creatures, awareness for service, family values, Dharama and so on. This is no doubt the most authentic version of Garud Puran and brings forward the sole of prêt kalp.
The Garud Puran is the only book in the world written on post death journey and the present author feels that this is one book everyone should read before one dies and read it with full faith and reverence. Interestingly, the last chapter (Chap. 16) is the soul of this scripture, the subject matter of this chapter is also not directly related with the previous chapters, but one needs to graduate through various other chapters to understand the concluding one.
This is publish by DIAMOND BOOKS (www.diamondbook.in). Will be available on Amazon very soon.