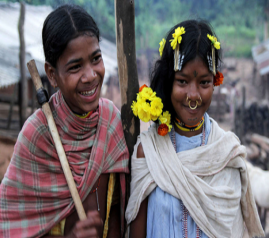 Adivasis are those people who live in remote villages and in forests. They are classified as scheduled tribes, and our government is also giving much importance to them.  But still most of them are living below the poverty line, and they are finding it very difficult to meet their daily needs.

Some Adivasis are classified as wild and dangerous people and they would even kill the people, when they enter into their place. In an island at Andaman, the tribal people are very wild, and whoever enters their place, would be immediately killed by them using spear and arrow. They are considered as isolated people, and they didn’t want to entertain others, by the way of welcoming them to their place. They also didn’t want to lose their independence. But all the adivasis do not behave like that. Most of them are living in Andhra Pradesh,  Gujarat, Jharkhand, Madhya Pradesh, Maharashtra and in the Andaman and Nicobar Islands.

Some Adivasi children are studying well with the aid of the government, and they are also working in government departments, and even some of them have served as ministers in the Indian government.

Adivasis are generally considered as the descendants of the ancient warriors who had faithfully served their kings and lost their lives in the battle field. Adivasis lives their life by way of hunting the animals. But since hunting is banned in India, they are collecting honey from the honey nest and selling it to the people.

Nowadays the Narikuravar community people are also claiming themselves to include in the list of Adivasis in order to get government aid. Narikuravas used to worship Lord Muruga as Kurinchi Andavar, and considers his consort Mata Valli as their Kula Devata, and would worship her by performing puja and offers food items. Narikuravas mostly suffer from poverty, illiteracy and from diseases, since their living conditions are very poor.

Narikuravas main occupation is by selling low cost jewellery items, pins and cloth bags. We must encourage them by buying their products, and must make them to smile in their life regularly. They should not be considered as untouchables and we must mingle with them in a friendly manner. They are also considered as the incarnations of warrior gods and the attendants of Lord Muruga, who fought against the powerful demon Surapadman and brought victory for Lord Muruga.