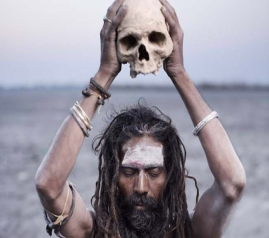 The Aghori saints are the devotees of Lord Shiva and they used to do post-mortem rituals, and reside in the cremation grounds, apply cremation ashes on their bodies, and use the bones from the dead bodies for making the skull kapalas. They also used to eat dead body’s flesh. They didn’t take bath properly, and do not observe cleanliness, and do not eat properly, and their main aim is to keep on thinking their beloved god Lord Shiva, and to reach Kailasa, after their death. They act opposite to the orthodox Hindu Brahmins.

Aghori saints contain great powers, and they heal the people with dreaded diseases through the sacred ash, and by chanting the “OM NAMAH SHIVAYA” mantra. They used to frequently perform meditation on Lord Shiva. Aghoris used to worship Kalabhairava, a form of Lord Shiva, and they are also considered as a form of Kalabhairava. Aghoris believe that Shiva is responsible for everything and they consider that Lord Shiva is the creator, protector and the destroyer of the entire universe.

Aghoris also worship Lord Dattatreya as a part of their prayers. Some Aghoris worship Tara Devi, a form of Mata Parvati. They are controlling their senses, and their minds are fully filled up with the thoughts of Lord Shiva only. Hinglaj Mata is the Kuladevata of the Aghoris. The main living place of Aghoris is Varanasi, and most of them would live in the banks of the Holy River Ganges.

It is believed that Aghoris are the blessed souls, and they are sent by Lord Shiva, to spread the Bhakti Spirit of Lord Shiva in a different manner. It is also believed that if we are blessed by an Aghori saint, we would live a healthy, wealthy and a happy life and our life would prosper, and since Aghoris are the worshippers of Kala Bhairava, enemy related problems would not arise in our life.

Let us praise the great Aghoris and be blessed.