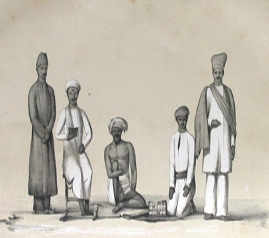 Ancient Hindu royal servants are the ministers, warriors, poets and the servants of the kings. Ancient Hindu kings were very much respected, and they were considered as a god among their people. Ministers would give proper suggestions to the kings, during their tough times, and also would pacify their mind by making them to worship the almighty for finding solutions for their problems. Some Ministers would act in a friendly manner, and mingle with them properly and even participate in the family functions of the kings.

The pious minister Sumantra, who served sincerely to king Dasarata, remained with him during his difficult times, and consoled him during the time of Rama’s exile. Similar to that, the great Chanakya, minister of Chandragupta, had given valuable suggestions, and properly guided his king Chandragupta, and Chanakya was considered as a clever and a pious scholar.

Lot of warriors and soldiers have sacrificed their lives in the battle field for the sake of their kings. The divine warrior Veerabahu fought with the demon king Surapadman along with Muruga, and killed many demons through his bravery and archery. In the army of Lord Rama, lot of monkey soldiers were become great warriors and they bravely attacked the demons with trees and their nails, and due to that, Lord RAMA had won in the battle with Ravana, and killed him.

Common people also would dedicate their lives to the kings in case of enemy invasion, and they also would change themselves into warriors and quickly train in the warfare and would try their level best to fetch victory to their beloved kings. They have done all these, since they have also treated their kings as the saviours and the divine avatars of god.

Let us worship the great warrior god Muruga and be blessed.