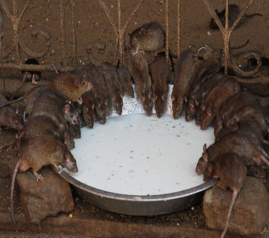 Rats are considered as the worshipful creatures, and they are respectfully treated by the Hindus, and they are mentioned in the holy texts of Hinduism. Rat is considered as the divine vehicle of Lord Vinayaka, and they are believed to be the favourite creatures of Karni Mata, a form of Mata Durga Devi. The great King Mahabali, who was the grandson of Bhakt Prahalad, in his previous birth took the form of a rat, and due to his intelligence, he was blessed by Lord Shiva to be born as King Mahabali. Rats are very clever mammals and they didn’t bite or cause harm to others, unless they are attacked by others.

In the Karna Mata Temple at Rajasthan, Rats are given much importance, and they are fed with lot of milk. Some devotees, used to drink the left over milk drank by the rats, and it is believed that by drinking the remaining portion of the milk drank by the rats, would cleanse our mind, and relieves us from our sins and diseases. Cats are considered to be the enemies of rats, and hence rats used to stay away from the eyes of the cats. In the Vinayaka temples, we can find the idol of Mushika, a form of rat, in front of the main shrine.

Whenever we find rats in our home, instead of killing them, we can safely place it in our gardens or in the parks, and they would live their life by eating small insects, fruits and vegetables. If we like to adopt rats, we can keep them as our favourite pets also. By caretaking of rats, we would get the blessings of Lord Vinayaka, and Karni Mata, and our life would prosper, and after our death, we would reach the Divine Lokas, and live peacefully for ever.

Let us worship Lord Vinayaka and be blessed.