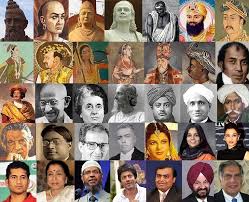 Some of the greatest Indian personalities, who have contributed to enriching the values and morale of the country, especially during India’s Independence struggle are briefly described as follows:

o   Acharya Vinoba Bhave (1895-1982) – He was a great Sanskrit scholar and was the driving force behind the Bhoodan Movement, which aimed towards the equitable distribution of land.

o   Amrita Shergill (1913-1956) – Born in Budapest, Hungary, Amrita Shergill later settled at Shimla. She was one of the path-breaking modern Indian artists and had been educated in music and painting in Paris. Some of her most famous paintings are The Celibate, Three Virgins and An Ancient Story Teller.

o   AnnasahebKarve (1858- 1962) – A steadfast activist for the upliftmentof women, AnnasahebKarve was also a staunch advocate of widow remarriage. He later went on to establish the BharatiyaMahilaVidyapeeth.

o   Aurobindo Ghosh (1872-1950) -Aurobindo Ghosh was initially a staunch freedom fighter and was very active in the radical groups. But, he suddenly changed his course and became a saint and yogi. Some of his major literary works are Veda Rabasya, Geeta Ki Bhumika, DivyaJeevan, Sauitri, Future Poetry and the Divine Life.

o   BalGangadharTilak (1856-1920) – He believed that militant methods are the only way, to successfully counter the British oppression. He was also affectionately called Lokmanya. He started the very popular journals i.e. Kesari in Marathi and Maratha in English. He also coined the term Swaraj.

o   Bhagat Singh (1907-1931) – Born near Jalandhar, SardarBhagat Singh was martyred along with his fellows Sukhdev, Rajguru and Dutt. They had courageously bombed the Central Assembly and was therefore hanged and martyred on March 23, 1931.

o   Dr. B.R. Ambedkar (1893-1956) – Dr. Ambedkar was educated in America and England. He later went on to become one of the founding fathers of the Constitution of India. He was a leader of the underprivileged classes of the society. He had embraced Buddhism, to protest against the oppressive orthodox practices of Hinduism.

o   Chandra Shekhar Azad (1905- 1931)- He was a contemporary of SardarBhagat Singh and led an active life in the province of Uttar Pradesh. He led the Hindustan Republican Army as well as the Hindustan Socialist Republican Association. He had looted the government treasury a number of times. He was later hounded and killed by the police.

o   Chhotu Ram (1833- not certain)- An activist dedicated towards public life, Chhotu Ram had later acted as the leader of the Unionist Party in the Punjab Legislative Council.

o   C.R. Andrews (1871-1940)- An English priest, who had dedicated himself to the principles of Mahatma Gandhi, C.R. Andrews later took up the cause of India’s Independence struggle.

o   Chittaranjan Das (1870-1925)- A lawyer by profession, who had successfully defended Aurobindo Ghosh, Chittaranjan Das also earned the honorific title of Deshbandhu. He later joined hands with LalaLajpatRai and Motilal Nehru, to form the Swarajya Party.

o   C.V. Raman (1888-1970)- Dr. ChandrashekharVenkata Raman, postgraduated from the Presidency College, Madras. He later won the Nobel Prize in Physics in 1930, for his discovery in the properties of light, also known as ‘Raman Effect’. He was also conferred the Bharat Ratna, by the Government of India, in 1954.

o   DadabhoyNaoroji (1825-1927)- Also affectionately known as the ‘Grand Old Man of India’, DadabhoyNaoroji was one of the founder members of the Indian National Congress.

o   D.H. Chapekar (1869-1899)- DamodarHariChapekar, along with his brothers BalkishanChapekar and VasudevChapekar had killed two British officers in 1897. This was considered to be the first act of terrorism against the British Government.

o   Dhyan Chand (1905-1979)- Scoring a total of 101 goals in the Olympics and 300 goals in other international matches, Dhyan Chand was the captain of the Indian men’s Hockey team, at the historic 1936 Berlin Olympic Games.

o   Ganga Ram (1851-1927)- One of the pioneering engineers of India, Ganga Ram was a great philanthropist, despite his humble beginnings. Ganga Ram Hospital in New Delhi is named after him.

o   Ghanshyam Das Birla (1894-1983)- One of the pioneering industrialist of India, G.D. Birla was the president of the Indian Chamber of Commerce in 1924 and was also one of the members of the Indian Fiscal Commission on Labor in 1939. He also founded the Birla Institute of Technology and Science in Pilani, Rajasthan.

o   G.K. Gokhale (1866-1915)- The political guru of M.K. Gandhi and M.A. Jinnah, Gopal Krishna Gokhale was elected to the Bombay Legislative Council in 1899. He also founded the Servants of India Society in 1905. He was also one of the members of the Imperial Legislative Council.

o   GovindBallabh Pant (1887-1961)- Conferred the Bharat Ratna in 1957, by the Government of India; G.B. Pant became the chief minister of Uttar Pradesh and the Union Home Minister.

o   HomiJehangirBhaba (1909-1966)-  The President of the Indian Science Congress in 1951 and the Chairman of the Atomic Energy Commission of India, HomiJehangirBhaba was one of the most world-renowned Indian Physicists. He later presided over the Atoms for Peace Conference at Geneva in August 1955.

o   Iftikhar Ali Khan (1910- 1952)- The only sportsman to have played Test cricket for both India and England, Iftikhar Ali Khan had toured Australia with Douglas Jardine’s England Cricket team. He was later dropped from the team, for objecting to the body line tactic of Douglas Jardine. He also captained the Indian cricket team in 1946 and was one of the members of the winning Indian Hockey Team in the 1928 Amsterdam Olympics.

o   Jagdish Chandra Bose (1858-1937)- Author of the books Response in the Living and the Non-Living, Plant Responses and Motor Mechanism of Plants, Jagadish Chandra Bose was a professor of physics at the Presidency College, Calcutta. His major works were on the plants and metals.

o   Jamshedji Tata (1839-1904)- Considered being one of the pioneering industrialists;Jamshedji Tata began with a cloth mill in Nagpur. He later built the ‘Steel City’, Jamshedpur and also established Indian School of Science, Bangalore and Taj Hotel, Bombay.

o   Jawaharlal Nehru (1889- 1964)- The first Prime Minister, after the attainment of Independence from the British Rule, Jawaharlal Nehru was elected the president of the Indian National Congress five times. Mahatma Gandhi was his political teacher and his birthday on 14th November, is celebrated every year as the Children’s Day.

o   J.B. Kripalani (1888- 1982)- A secretary of the Indian National Congress, who later went on to become its president in 1946, J.B. Kripalalani was also the founder of the KisanMajdoor Dal.

o   J. Krishnamurti (1895- 1986)- A profound thinker and a spiritualist, JidduKrishnamurti was firstly initiated into the teachings of the Theosophical Society by Annie Besant and later he disassociated himself from the society and toured different countries across the world.

o   J.G. Phule (1827- 1890)- JyotiraoGovindraoPhule was a social reforemer and a staunch activist for the empowerment of women.

o   K.D. Chatopadhyay (1903- 1989)- Firstly the General Secretary and then the President of the All India Women’s Conference, KamaladeviChattopadhyay was also associated with different forms of art such as dance, singing and drama.

o   K.M. Munshi (1887- 1971)- One of the framers of the Constitution of India, K.M. Munshi is also regarded as a prolific writer in Gujarati. He was also the Food Minister, the Home Minister and the Governor of U.P.

o   Khudi Ram Bose (1889- 1908)- A revolutionary figure, who tried to popularize the gospel of VandeMataram, Khudiram Bose accepted the noose with a smiling face, when he prosecuted for hurling a bomb at a British Magistrate.

o   Madan LalDhingra (1887- 1909)- One of the fearless Indian revolutionaries in the Indian Freedom Struggle, Madan LalDhingra died in the same jail as SardarUdham Singh, after killing two British officers.

o   M.M. Malaviya (1861-1946)- Pandit Madan Mohan Malviya, was the founder of the Benaras Hindu University and he was also very much dedicated upliftment of the educational status of Indians at large.

o   Masti V. Iyengar (1891- 1986)- Author of KelpuSannaKatheyak and ChikkavirRajendra, VenkatesaIyengar was a prolific and revolutionary novelist.

o   Maulana Azad (1888- 1958)- Maulana Azad was one of the most prolific nationalists during India’s struggle for Independence and his revolutionary tactics and patriotism led to his imprisonment a number of times, under the British Rule.

o   MeghnadSaha (1894- 1956)- A specialist in the field of astrophysics, MeghnadSaha was appointed as the Director of the Indian Science Association in 1913, by Pandit Nehru.

o   Milkha Singh (1935)- A winner of the gold medal in the Asian Games at Jakarta, Milkha Singh was also known as the ‘The Flying Sikh’. Later, he was also awarded the Padma Shri.

o   Morarji Desai (1896)- An advocate of naturotherapy, Morarji Desai gave up a promising career in the Civil Services to join the freedom movement and the Indian National Congress. He also served as the Deputy Prime Minister of India.

o   Mother Teresa (1910- 1997)- Born in Albania, Mother Teresa was later awarded the Nobel Peace Prize in 1979 and the Bharat Ratna in 1980, for her outstanding and tireless efforts directed towards the upliftment of the poor and the needy.

o   Anna Saheb (1824- uncertain)- Adopted by PeshwaBaji Rao in 1827, Anna Saheb along with Rani Lakshmi Bai of Jhansi is remembered as the driving force behind the 1857 revolt.

o   Narendra Deva (1889- 1956)- An educationist, patriot and politician, Narendra Deva was also a major activist and the founder of the Praja Socialist Party.

o   Rafi Ahmed Kidwai (1896- 1954)- Once a private secretary of Motilal Nehru, Rafi Ahmed Kidwai was the Food and Agriculture Minister of the Nehru Government and was jailed several times for his participation in the Quit India Movement.

o   Raja Bhoja (997- 1052)- Believed to be a patron of art and literature, Raja Bhoja appears as a hero in many Gujarati folk tales.

o   Raja Rammohan Roy (1772- 1833)- The founder of the BrahmoSamaj and the AtmiyanSamaj, Raja Rammohan Roy was the revolutionary social reformer, who sought emancipation of women and international education for his countrymen. He also been honored as the ‘Father of Indian Renaissance’.

o   Rajneesh (1931-1990)- A preacher of a particular kind of spiritualism, Rajneesh Chandra Mohan later became a lecturer in Philosophy. He later declared himself to be a Bhagwan and built an ultra-modern town, called Rajneeshpuram, in Oregon, U.S.A.

o   RamanujamSrinivasa (1887-1920)- A fellow of Royal Society in 1919, Ramanujam discovered novel ways of solving mathematical problems. Later a commemorative stamp was issued in his name.

o   Ravi Shankar (1920- 2013)- One of greatest Sitar maestros of the world, Pandit Ravi Shankar was an elected fellow of the SangeetNatak Academy. The Government of India also honored him, by electing him to the Rajya Sabha.

o   RomeshChanderDutt (1848- 1909)- Writer of The History of Civilization in Ancient India, Great Epics in Ancient India and England and India, Romesh Chandra Dutt belonged to the family of Toru Dutt, the Anglo Bengali poetess.

o   Salim Ali (1896-1987)- Writer of the books The Roll of a Sparrow, Handbook of Birds of India and Pakistan and The Book of Indian Birds, Salim Ali was an ornithologist, associated with the Bombay Natural History Society.

o   Sarojini Naidu (1879- 1949)- The first president of the Indian National Congress in 1925, Sarojini Naidu was also known as the Nightingale of India. Later, she was appointed as the Governor of India.

o   S.N. Banerjee (1848- 1925)- One of the most ardent freedom fighters, S.N. Banerjee, his political career was influenced by English literature.

o   Swami Dayanand (1824- 1883)- Also known as Swami DayanandSaraswati, he was the founder of the very popular Hindu Arya Samaj Movement.

o   Tenzing Norgay- (1914- 1986)- Tenzing Norgay was the first Indian to scale the Mount Everest peak, along with the British mountaineering team led by Sir Edmund Hillary. He was awarded the Padma Bhushan in 1959.

o   Udham Singh (1899- 1940)- Udham Singh had avenged the JallianwallaBagh massacre, by shooting and killing General O’ Dyer. He was later arrested and sentenced to death.