India’s National Emblem is a direct replica of the Lion pillar of Sarnath, located near Varanasi in Uttar Pradesh. The pillar in Sarnath was erected by Emperor Ashoka in the 3rd century BC. The essential motivation behind the building of the Lion pillar was to mark the very spot where Gautama Buddha had proclaimed his gospel of peace and emancipation.

Symbolism of The Emblem

The National Emblem significantly encompasses the fusion of ancient and contemporary, thereby promoting peace and reconciliation. An abacus showcases the four Lions facing towards the four cardinal directions back to back and is further supplemented by a frieze carrying sculptures of an Elephant, a Bull, a Galloping Horse and a Lion compartmented by an intervening Wheel over a bell-shaped Lotus.

The National Emblem which was adopted and incorporated by the Government of India on January 26th, 1950, is different in symbolic aspects from the Sarnath capital. Our National Emblem shows only three open-mouthed Lions since the fourth is hidden from the perspective. The abacus is replaced by the Dharma Chakra (Wheel of Law) with a Bull and a Horse appearing on the either side. Inscribed below are the words Satyameva Jayate (‘Truth alone Triumphs’) directly extracted from the Mundaka Upanishad. The National Emblem commands a high degree of respect and dignity in the National scenario and is a re-assertion of the National commitment of peace and goodwill.

The original inspiration of India’s National Emblem i.e. the Lion capital of Sarnath was set up by Emperor Ashoka to mark the extent to which he had been able to disseminate the Buddhist Philosophy. The passion of Emperor Ashoka towards the tenets of Buddhist Philosophy was amply evident from the inscriptions found in the numerous pillars he had set up during his reign. The Lion capital at Sarnath is especially significant because it was believed to the place where Lord Buddha had preached his very first sermon. The imposing Lion capital had had inscribed upon it the Ashoka’s Dhamma or Philosophies.

Each and every element of the National Emblem has an individual significance.

Such similar capitals or pillars were set up by Emperor Ashoka to promote his Dhamma in Sanchi, Vaishali, Lauriya-Areraj, Lauriya-Nandangarh, near Hindu Rao Hospital, and Feroz Shah Kotla. 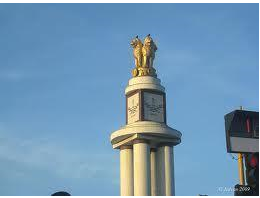 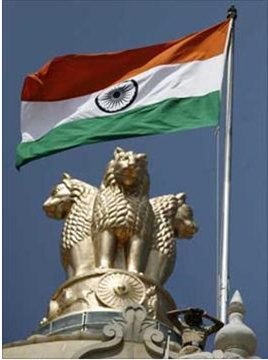 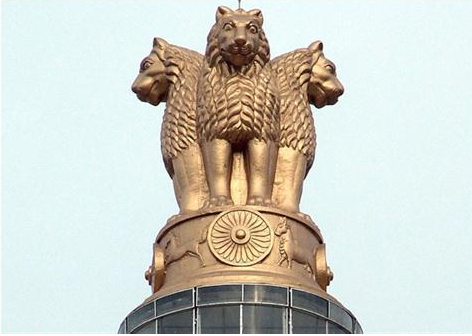