This lush contemporary 28-acre campus is a tropical oasis where nature and the 21st Century blend seamlessly, both within and without. With its white marble pathways, elegant black buildings, abundant foliage and Olympic-sized swimming pool, it is the perfect setting to take time out for yourself. This is a place where you can simply relax and where you can also enjoy the company of visitors of all ages from over 100 countries. You can choose if you want to do something, or if you just want to rest, swim, meditate — or just to be. You can learn simple Osho Active Meditations, techniques specifically designed for the contemporary over-charged mind and stress-impacted body. You may like to nourish your body-mind-soul with a stunning selection of individual sessions, like bodywork and massage, and longer workshops and courses — all designed to help you become more aware of yourself.

Or perhaps experiment by learning new life skills and acquiring tools to take home, that will help you remain relaxed even in the busiest of workaday environments. The key to relaxation is awareness, being a keen observer of all that is going on both inside and around us — this is the inner science, often also called meditation. And while we each walk this walk alone, it is more supportive and more fun to share the process with others, whether during the various daytime activities, or in the evening — trying out a new meditation technique, or enjoying an evening a party, dancing, or the plaza café, watching or participating in live theater events or just going to the movies. Above all this is a unique environment created through the awareness, humor, and celebration that each of those brings to the table.

“Every year thousands of people visit this luxurious resort… A very comfortable paradise where you can stay a long time, with low-budget hotels nearby and very good food in the commune, with meditations free. The atmosphere is really like a fairy tale. A paradise where all your emotional, bodily and spiritual needs are met. I can advise everybody to visit for a few days and walk around that beautiful garden where everybody is friendly.” Elle Magazine

“It was the sheer beauty of the place that I first fell for.  Meditation was in the very air.”

Osho was born on December 11, 1931 in Kuchwada, a small village in the state of Madhya Pradesh, central India. In His youth He experiments with meditation techniques. On March 21, 1953, Osho becomes enlightened at the age of twenty-one, while majoring in philosophy at D.N. Jain college in Jabalpur. In 1956 Osho receives His M.A. from the University of Sagar with First Class Honors in Philosophy. He is the All-India Debating Champion and Gold Medal winner in His graduating class.

In 1958, he was appointed Professor of Philosophy at the University of Jabalpur, where he taught until 1966. After nine years of teaching, He leaves the university to devote Himself entirely to the raising of human consciousness. On a regular basis, he began to address gatherings 20,000 to 50,000 in the open-air parks of India’s major cities. Four times a year he used to conduct intense ten-day meditation camps.

By Late 1960′s, His Hindi talks become available in English translations. In 1970, Osho begins to initiate seekers into Neo-Sannyas or discipleship, a path of commitment to self-exploration and meditation, which does not involve renouncing the world or anything else. At this time, the first Westerners begin to arrive and to be initiated into Neo-Sannyas. Among them are leading psychotherapists from the human potential movement in Europe and America, seeking the next step in their own inner growth. With Osho they experience new, original meditation techniques for contemporary man, synthesizing the wisdom of the East with the science of the West.

From 1974 – 1981, he gave a 90 minutes discourse nearly every morning, alternating every month between Hindi and English. His discourses offer insights into all the major spiritual paths, including Yoga, Zen, Taoism, Tantra and Sufism mystics like Gautam Buddha, Jesus, Lao Tzu, and others. These discourses have been collected into over 600 volumes and translations. In the evenings, during these years, He answered questions on personal matters such as love, jealousy and meditation. These talks were compiled in 64 Darshan Diaries of which 40 are published.

On January 19, Osho left His body. His Samadhi is in Chuang Tzu Auditorium inside the Osho Commune, Poona.

Activities at the Osho Dhaam

“I must be the first enlightened person who is using therapeutic groups as a help to meditation, for the simple reason that in the past man was so simple there was no need for him to pass through therapies first. He was healthy in a way, saner in a way, authentic, truer, sincere and honest.”

Modern man is cunning, very cunning, and very repressed, so much so that he himself is not aware what he has repressed in his being. And modern man is very clever, he is not simple. He is so clever that he can go on deceiving even himself. By deceiving others continuously he has become skillful in deceiving. The skill has become so ingrained that now no conscious, deliberate effort is needed for him to be cunning. He can simply be cunning without any effort on his own.

This changed situation demands new methods, new approaches, and new windows, so new that your mind is at a loss what to do. If your mind knows what to do, the device cannot be of any help. The mind, when it is unable to find a way out, is at a loss — that is the great, precious moment when something of the beyond can happen.

All of Osho’s active meditations involve a beginning stage of activity — sometimes intense and physical — followed by a period of silence. All are accompanied by music that has been especially composed to guide the meditator through the different stages. Osho has also recommended different meditations for different times of the day. Follow the links below for details.

The Osho approach to therapy is that it can never be the ultimate solution to human problems, but it can be used as a tool to help prepare the ground for meditation. Based on this understanding he has created a series of “meditative therapies” that give participants the opportunity to dissolve the tensions and repressions that keep them from being able to sit silently and observe the mind that creates problems in the first place.

Uniquely simple and effective, these methods involve a minimum of interaction among the participants, but the energy of the group helps each individual go more deeply into his or her own process. No “therapist” is required, but only a facilitator who has gone through the process and has been trained in conducting it.

Osho has spoken on the 112 methods of meditation given by Shiva to his consort, Devi. VIGYAN BHAIRAV TANTRA contains the complete series of discourses given by Osho on all these meditation techniques, and his responses to questions raised by seekers about the meditations. 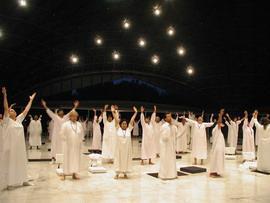 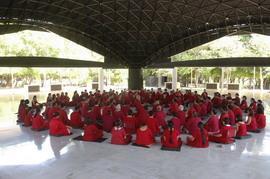