In: Modern India, Universities
With: 0 Comments

The History of the Vidyaniketan commences from a small school situated at a village named Babada about 35 kms north of Porbandar. This school was started by the teachers themselves who migrated from Ahmedabad to pursue the teachings to the eager students of their school in Ahmedabad, which got closed abruptly.

At the request of the teachers of the school and the local people who took interest in the school, Bhaishri visited the school. He appreciated the efforts being made by the teachers and the locals in such difficult circumstances with meager funds at their disposal. Bhaishri decided to support the school. Soon thereafter, Bhaishri was appointed the chairman of the trust running the school to take complete charge and to lend his vision for its fulfillment.

Expansion of the Trust

After careful selection, Bhaishri appointed fifteen trustees to the trust named ‘Shri Bharatiya Sanskruti Samvardhak Trust’, which has been in existence since the year 1984. The trust was given the responsibility for supporting and running the school. Gradually, the pressure started increasing on the school and there were many more applicants than the school could accommodate. Bhaishri decided that it was now the right time to relocate it in a larger area for its further development for it to be more constructive and useful to the student community.

Having decided to choose another suitable place, Bhaishri decided to set up a Vidyaniketan, which he emphasized, would be run like an ashram and would be called ‘Rishikul’. This was the ancient way of imparting education in India. All his students would be called ‘Rishikumars’, who, after having completed their studies from the Rishikul, would become assets to society. Bhaishri said the motto of the Vidyaniketan would be “Gyanarth Pravesh, Sevarath Prasthan”. This implies that a student would enter the school vowing to gain knowledge and would leave the school covenanted to be of service to mankind at large.

Relocation of the school

Bhaishri then approached the Government of Gujarat requesting for an adequate piece of land to set up this Vidyaniketan. Deeply impressed by the endeavors of Bhaishri, in 1991 the Government of Gujarat allotted 85 acres of land to the trust to set-up this Vidyaniketan at Porbandar, a town in the Saurashtra region of Gujarat State on the West Coast of India. Porbandar is the birthplace of Gandhiji, and is also the birthplace of Lord Krishna’s great friend, Sudama.

Plans were formulated to set up a complex with total amenities to house 500 students on the campus and to have their education in Sanskrit, grammar and other essential modern subjects necessary to become capable and virtuous Brahmins.

The Vidyaniketan endeavors to lay stress on the rich Indian heritage and culture. The emphasis is to rekindle humanity through education based on the prestigious and traditional Indian values.

Bhaishri was born on 31st August 1957, in a small village named Devka situated in the Saurashtra district of Gujarat. His parents, Late Shri Vrajlal Kanjibhai Oza and his mother Smt. Laxmiben Oza are Brahmins hailing from the Audichyacommunity.

Bhaishri received his initial education at ‘Tatvajyoti’, a Sanskrit school located in the small town of Rajola. Eventually, he moved to Mumbai, where he completed his primary education and attended college. Although Bhaishri pursued his education with great sincerity, his heart and soul belonged to learning the scriptures and spreading the divine message. While other children played, Bhaishri spent his time immersed in religious activities.

Bhaishri’s interests always led him to study and practice the religious scriptures. He would often attend his uncle, Shri Jeevarajbhai Oza’s discourses. Shri Jeevrajbhai was a highly respected narrator of the Shrimad Bhagavat, himself and he first noticed a spark of spiritual genius in Bhaishri’s character and encouraged it. Bhaishri developed a keen interest in the Shrimad Bhagavat, the Ramayanatoo, in particular the Ramacharitamanas composed by Gosvami Tulsidasaji, and the Bhagavad-Gita.

From humble beginnings, Bhaishri has gone on to capture the hearts and minds of millions across India and the world guiding his brethren through life’s trials and enriching their lives with spirituality.

As Bhaishri’s kathas gained popularity all over India, devotees were eager to listen to these discourses beyond the Indian shores. Across the world, in the United States, Canada, the UK, Portugal, Africa, Australia and New Zealand, Bhaishri captivated audiences of all ages and communities.

Having studied the Vedas and the Upanishads in great depth, Bhaishri also wished to propagate the knowledge of these scriptures and bring forth a new generation of scholars who would take the past into the future. Thus emerged, the noble thought of Sandipani Vidyaniketan.

Bhaishri’s kathas and discourses have helped and inspired many to lead their lives the right way. People have shown their gratitude in many different ways. They have opened their hearts to his various causes by contributing their time, effort and giving donations.

For thousands, Bhaishri is more than just a spiritual leader. He is a source of knowledge and an inspiration.

The students lead a very austere life and adopt an extremely simple way of living with no special attachments for bodily requirements. They are totally dependent on themselves alone and are absolutely self-reliant in executing their daily routines, under the supervising eye of the housemaster, who is solely responsible for their wellbeing and upbringing. It is like a large family living together harmoniously moving ahead to achieve the common goal of preparing themselves to serve humanity. Apart from basic education, the students are exposed to various other facilities such as: computer education, sports, classical music and arts and craft. The students also indulge in extracurricular activities such as: staging plays, debates and elocution competitions, instrumental and vocal music competitions, outdoor sports and indoor games and providing services during festivals and events organized at Sandipani. The festivals and religious days are celebrated at with great enthusiasm and the Rishikumars contribute in making each event a success with their hard work and service.

While strictly on time for each activity the students also help themselves by completing their daily chores of washing their clothes, making their beds, cleaning their rooms and helping in maintaining a neat and orderly campus. Totally devoted to the upbringing of society, theirs is a life of commitment and total dedication.

The uniform comprises of the most modest, comfortable and environmental friendly, traditional Indian dress of white kurta and dhoti with an orange upavastra. The students adorn their forehead with a paste made from chandan and kumkum called tilak.

The Rishikumars are subjected to a well chalked out routine for the entire day commencing at 6.00 am to 10.00 pm. The day is an organised schedule of timed events that include morning prayers, physical exercise, attending classes, simple and nutritious meals, evening prayers, academics, practical work and the duties at the Vidyaniketan. The Rishikumars are well brought up in an environment that is conducive to both their physical and mental growth. Each day is filled with activities that challenge them, helping them groom their talents.

Connecting to the Lord through prayer is a ritual religiously followed at Sandipani Vidyaniketan. The aarti is attended by all the students and done by them. It is a pleasure to see the children chant the mantras of the religious rites with such precision in their recitals. With Bhaishri as their mentor, they have been exposed to excellent guidance in the spiritual sphere and just as Bhaishri influences millions of devotees in understanding the supreme essence, he has also been instrumental in invoking faith for the Almighty in the minds of his students at the Vidyaniketan.

The yagya or the fire sacrifice is one of the oldest rites in the Hindu culture. At a very early age the children at the Vidyaniketan have the benefit of performing the yagyas and they are taught to be proficient in the reciting of the mantras. Every single day of the year the yagya is performed by Rishikumars.

At Sandipani Vidyaniketan, the philosophy of service is embedded into the teaching process in a way that prepares the graduate from the institute to have a mindset of spreading the divine message. According to Bhaishri, teachers have become sellers of knowledge and not propagators. The Sandipani students are ambassadors of the Indian culture and their aim is to go into social communities and contribute to its progress. It is not only academic knowledge that drives the Sandipani Rishikumars; it is the immense practical exposure to serving humanity as they learn from their experiences while they grow at the Vidyaniketan. Service isn’t a special way of behaving, it is the regular conduct of the Rishikumars to volunteer to offer help to whosoever requires it. 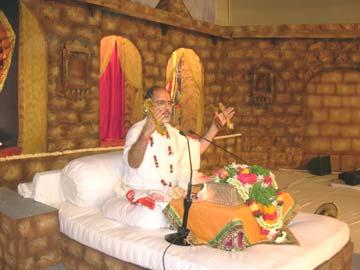 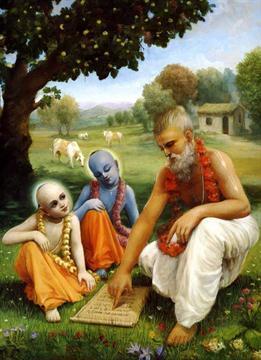 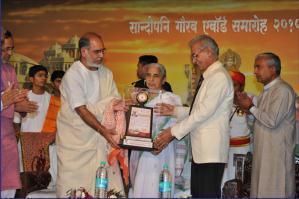