Deeper, richer, inner lives. A stronger sense of meaning and purpose. A more loving and peaceful world. From its centers around the world. Sawan Kirpal Ruhani Mission/Science of Spirituality strives to help individuals and communities achieve these cherished goals.

A global non-profit spiritual organization, Sawan Kirpal Ruhani Mission/Science of Spirituality is made up of hundreds of thousands of individuals of all nationalities, races and faiths who are deeply committed to bettering themselves and the world through a spiritual way of living based on meditation and ethical values.

Each year the international headquarters in Delhi, India, hosts hundreds of thousands from all backgrounds who come together to study spirituality and mysticism as the silken thread that knits the world into a single human family. At their many centers worldwide, members lead and participate in community events that further mutual understanding and respect.

In 1995, Sant Rajinder Singh Ji Maharaj established the first Darshan Academy in Meerut, India. Today, Darshan Academies throughout India educate children from pre-kindergarten through grade twelve. In addition to using a standard educational curriculum, Darshan Academy promotes the ethical and spiritual values common to all religions. Students, teachers and staff meditate daily, creating a focused atmosphere in which to study and learn.

Dedicated to serving humanity, the organization:

He travels throughout the world, conducting meditation seminars, giving talks on inner enlightenment, and sharing his message through radio and television with millions of people. He has written several books and numerous articles about spirituality, which have been translated into many languages, among them Inner and Outer Peace through Meditation and Empowering Your Soul through Meditation, both published by Element Books.

Actively committed to human unity and harmony, Sant Rajinder Singh Ji Maharaj has been honored by religious leaders and heads of state worldwide. He sponsors and participates in interfaith activities in America, Europe, and India, where hundreds of thousands come together to focus on spirituality, human unity, and religious fellowship. Recognizing the transcendent oneness at the heart of all religions, he emphasizes prayer and meditation as the true building blocks for achieving peace.

He spoke at the 1993 Parliament of the World’s Religions in Chicago, and, in 1994, at the World Conference on Religion and Peace in Italy. He was president of the Seventh World Religions Conference, held in 1994 in Delhi, India, where he was host to the first international, interfaith spiritual dialogue on the connection between prayer, meditation, and nonviolence. In 1995 in New York, he participated in programs honoring the 50th Anniversary of the United Nations, during which he led 4000 people in meditation. He was president of the 16th International Human Unity Conference, held in India in September 1996 and attended by over 100,000 people representing 36 countries. He subsequently presided over the 17th IHUC in Colombia, South America, and the 18th IHUC held in Munich, Germany in October 1999. He convened the 19th IHUC in India where it was held concurrently with an international millennium celebration.

In November 1999, Sant Rajinder Singh Ji Maharaj was invited to speak at the United States Coast Guard Academy as part of a four-part series on leadership. In August 2000, he spoke at the United Nations in the General Assembly Hall at the Millennium World Peace Summit of Religious and Spiritual Leaders, where he instructed everyone in the technique of meditation on the inner Light.

Sant Rajinder Singh Ji Maharaj presents spirituality clearly and directly. Advocating a balance between inner and outer life, he encourages people to fulfill their responsibilities to family and society while pursuing a spiritual life of inner contemplation and personal development. Dedicated to helping humanity, he says, “It is only when each individual has achieved inner peace that we will see lasting outer peace in the world.”

Activities at the Mission

Meditation: We just have to sit in a comfortable pose, close our eyes and look within ourselves. Through concentration and the silent repetition of God’s Name to keep our mind from distracting us, we can experience inner Light and Sound. We ultimately find that we are not merely our body and mind but the soul that exists beyond the demise of our physical body. Under the guidance of Sant Rajinder Singh Ji Maharaj, spiritual seekers from all over the world and all walks of life are taught the Sant Mat method of meditation. First, they learn an introductory technique, Jyoti meditation (meditation on the inner Light), which familiarizes them with the process of meditation by helping them focus their attention. Those wishing to go further become initiated and learn Shabd meditation (meditation on the inner Light and Sound).

Vegetarianism: The vegetarian lifestyle has recently become very popular, both as a way of eating and a way of life. Influenced by a number of different factors, millions of people worldwide have been turning to vegetarianism in increasingly greater numbers. One of the central tenets of Eastern philosophy is the concept of ahimsa, or non-violence. While many ethical systems espouse some form of non-violent ethic, what makes the practice of ahimsa radically unique is the universal scope of its concern. For most ethical schools of thought, the concept extends to the human race only.

Throughout the ages, spiritual teachers of many faiths have encouraged vegetarianism for a more compelling reason. They stressed vegetarianism as one of the cornerstones of a successful meditative and spiritual life. Sant Darshan Singh Ji Maharaj, author of “The Vegetarian Way of Life,” tells us a vegetarian diet is based on compassion and nonviolence. It helps us maintain a balance between our body and soul.

He says, “Should we stop to think about it, we would realize that the food we eat has an effect upon our physical, emotional, and mental makeup. If we are trying to lead a life of nonviolence and compassion, if we are trying to become more serene and peaceful, if we are trying to control our mind and senses, then we will naturally want to follow a diet that helps us achieve our goal.”

Positive Mysticism: Sant Rajinder Singh Ji Maharaj explains that we can attain self-knowledge and God-realization in the context of modern life. We can lead a productive, fulfilling life in the world while working towards spiritual ends. Indeed, spirituality means love in action. It means enjoying our spiritual riches and sharing them with all we meet. We can learn to balance our spiritual practices with our worldly responsibilities. Leading an ethical life of nonviolence, truthfulness, purity and humility, we can enjoy the fruits we gain within, in our meditation practice, and share these gifts with all we meet.

Sant Rajinder Singh Ji Maharaj personally encourages people to help others selflessly whenever and wherever they can, in order to make this world a better place. He teaches that respect for the environment and for all forms of creation is an important aspect of a spiritual life.

Initiation: Initiation is the process whereby the spiritual Master opens the inner eye and the inner ear of the disciples so they can see the Light of God and hear the inner Music. At the time of initiation, the spiritual Master explains the technique of Shabd meditation and gives the disciples the charged names of God, enabling them to concentrate on the inner Light, hear the holy Sound Current, transcend physical body consciousness, and experience the inner spiritual regions. Initiation is gift, given free, to all sincere seekers who fulfill the prerequisites.

Children’s Satsang embodies a dynamic vision of the future and seeks to implement that vision, working with children as young as three. Recent research has indicated that children grasp more quickly at a younger age. Both Param Sant Kirpal Singh Ji Maharaj and Sant Darshan Singh Ji Maharaj stressed the importance of spirituality being introduced into the lives of children as early as possible.

The concept of special programs for children, using the vehicle of satsang, was begun under the grace and guidance of our beloved Master Sant Darshan Singh Ji Maharaj. The rapid growth of Children’s Satsang within the last ten years is testimony to the tremendous grace showered by our Loving Master Sant Rajinder Singh Ji Maharaj. 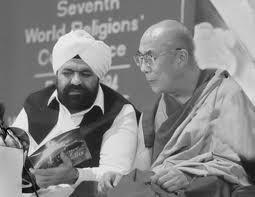 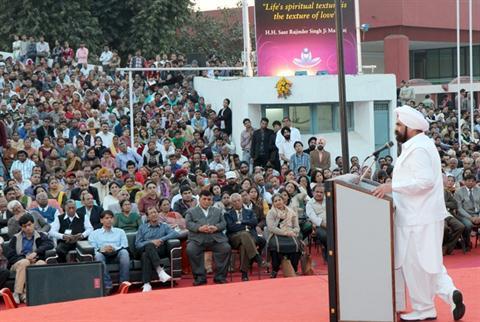 > Rajinder Singh ji at a meeting. 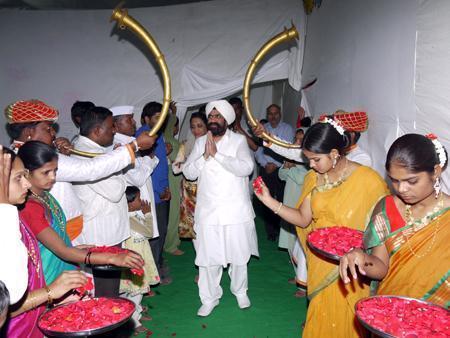 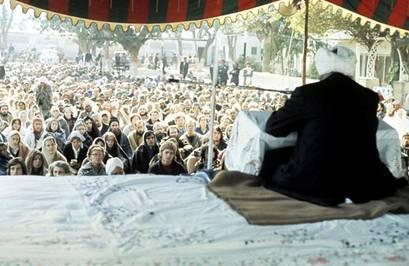 Satsang at the mission.