Library of Tibetian Works and Archives

In: Modern India, Universities
With: 0 Comments

The Library of Tibetan Works and Archives (LTWA) was founded in 1970 by the Dalai Lama with the aim of preserving Tibet’s culture. LTWA has a Governing Body of nine members, three of whom represents the Government of India. The remaining six are appointed by His Holiness the Dalai Lama. This Board directs policy and development, oversees all major projects and departments, and provides advice and guidance for future initiatives.

The responsibilities of the Administration Department include the overall management of the institute as a whole, relations with staff and support personnel; fiscal, accounting and budgetary operations; security; building maintenance and construction; computer and information services; printing and reprography services, registration of scholars and students, etc.

About the Library of Tibetian works and Archives

The LTWA is the official National Library, Museum and Archive. Having begun life with two humble collections in Tibetan and English, the library is now a repository for significant collections of artifacts, manuscripts and other records, while also serving as a centre for language and cultural education. It houses two significant libraries, a museum, and audiovisual, photographic and architectural archives. Holdings have grown to include more than 110,000 titles in the form of manuscripts, books and documents; hundreds of thangkas (Tibetan scroll paintings), statues and other artifacts; and over 6,000 photographs. The library’s significant oral history project was the first outside of Tibet . The LTWA also runs a publishing house, distributing its own titles in Tibetan, English and Hindi, largely on the topics of Buddhism and Tibetan culture. In recent years, another feather was added to the library’s cap when it was nominated as a resource centre for India ‘s National Mission for Manuscripts project.

As a centre for education, the LTWA has welcomed scholars from all corners of the globe and has had a proud association with many of the world’s most eminent “Tibetologists”, as Tibetan scholars are known. Educational programs in language, philosophy, culture and other fields of Tibetan study are run on a regular basis. Other educational activities include seminars and programs such as the Science for Monks project and the annual Translation Workshop. The library is officially recognized by Himachal Pradesh University as a Centre for Tibetan Studies.

As the twenty-first century begins, the library is confident in its role of preserving and educating others about a culture threatened with destruction. Now in its fourth decade, the LTWA continues to develop as the need for such an institution becomes more urgent. Library holdings increase every year and enrollments in philosophy and language courses continue to climb. Each year sees an increasing number of visitors, researchers and students drawn to this institution, which is able to provide them with an educational and cultural experience hard to avail elsewhere in the world.

His Holiness the Dalai Lama, is the spiritual leader of Tibet. The Dalai Lamas are believed to be manifestations of Avalokiteshvara or Chenrezig, the Bodhisattva of Compassion and patron saint of Tibet.  Bodhisattvas are enlightened beings who have postponed their own nirvana and chosen to take rebirth in order to serve humanity.

Objectives of the Library of Tibetian Works and Archives

The primary objectives of the LTWA are to provide a comprehensive cultural resource centre and to promote an environment that encourages research and an exchange of knowledge between scholars and students. These factors are of the utmost importance in a contemporary world shaped by political and spiritual confusion. In trying to fulfill its objectives, the library’s priorities include:

• Providing access to books, manuscripts and reference works (in Tibetan as well as in foreign languages) in study areas within library.

• Providing copies and prints of library holdings and acting as a reference centre for such source materials.

• Publishing books and manuscripts under the library imprint.

• Supporting research and study of the Tibetan language, both classical and modern.

Departments of the Library of the Tibetian Works and Archives

The library is organized into nine departments:

Education: The Research & Translation Department from the Library of Tibetian Works and Archives provides vital services to the publication departments of the institution. It supports scholarly research in all fields of Tibetan thought.

The department is staffed by highly qualified resident Tibetan scholars who have graduated from traditional Tibetan monasteries and others who have trained in contemporary universities. The team also translates texts for the publication department and compiles translations of the daily Buddhist philosophy classes.

The department also manages the Centre for Tibetan Studies. It offers courses for the growing number of people interested in Tibetan language, culture and philosophy. Classes were first taught in 1971 and have grown steadily in scope and attendance ever since. The Centre’s work is an important aspect of the LTWA’s efforts to both sustain and extend appreciation and understanding of Tibetan culture.

Classes in Tibetan language and philosophy are held six days a week. Two different courses run concurrently in each of the program. Language classes run three terms of three months each, while the duration of the philosophy courses depends on the texts that are being studied.

The academic year is 10 months long, from March to December each year. A class schedule is published annually by the department. Full term intensive courses in Tibetan language and literary appreciation are conducted every year.

Philosophy classes are taught by Geshes selected by the LTWA Board for their experience and good reputation. Their explanations are usually given in Tibetan and are translated into English by experienced interpreters. Classical Tibetan and Indian Buddhist texts are selected as the focus of study to provide first-hand knowledge of Buddhist philosophy, meditation, psychology and ethics. The student body typically includes Tibetan and foreign students including postgraduate scholars. Classes include meditation practice, lectures and discussion of texts and scriptures.

Language classes are taught by teachers fluent in both Tibetan and English. They cover spoken and written Tibetan, aspects of grammar and idiomatic speech, and are intended to equip students to study Tibetan culture and Buddhist thought. Colloquial and classical Tibetan are taught in advanced classes. Many of the texts used in the classes have been published by the LTWA. The class size average is 40 students. On the average students from more than 30 countries are registered for these courses. 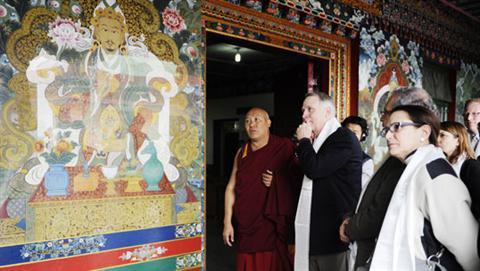 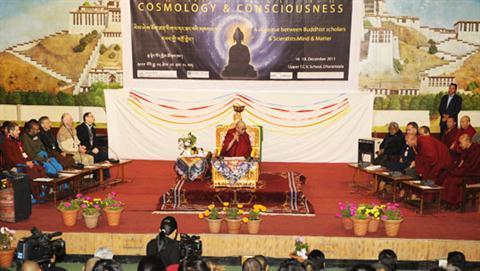 Library of Tibetan Works and Archives