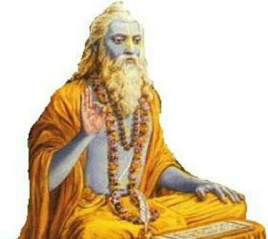 Parashara was a maharshi and the author of many ancient sacred hindu texts. He was the author of Vishnu Purana. His grandfather was Vasishta, father was Sakti Maharishi, and his son was Vyasa.

Parashara while travelling on the banks of river Yamuna was attracted by the beauty of fisherman’s daughter, satyavathi, and he united with her, and they had a son known Krishna Dvaipayana, who was later called as Vyasa, and he is also one of the incarnations of Lord Vishnu.

Satyavati took care of her son Vyasa, and after some time, Vyasa also became a Rishi and his mother Satyavati later was married to the Hastinapura king Santanu.

There is a Monument dedicated to Rishi Parashara at Sangli district of Maharashtra.

He is praised for his great meditative powers in vedas and ancient puranas.

He was a great scholar and a learned man, who was also a master in all kinds of art. He was well educated at his younger age, and done severe penance on Lord Vishnu, and obtained great power from him. He has got the great Veda Vyasa as his son, through his sincere devotion on Lord Vishnu. He spent his most of time in doing meditation and devoting to the god.

His appearance is mentioned in the vedas, as a bright divine sage, with a shining face, and contains divine powers through his severe penance. He was a humble and a noble rishi, who had served his guests in a proper manner, and providing food to them at his ashram.

He also visited many holy places and worshipped the gods. He contains great spiritual knowledge, courage, boldness and wisdom.

Let us worship this great rishi and be blessed.