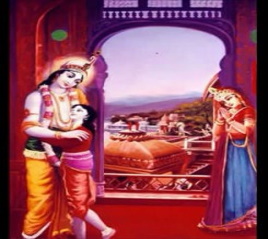 Pradyumna was the son of Lord Krishna and Rukmini. Pradyumna was an incarnation of Kamadeva, the god of love.

Pradyumna was born in Dvaraka during dwapara yuga. Once, Kamdev was burnt by Shiva when he disturbed Lord Shiva’s meditation. Later Lord Shiva blessed his wife Rati and told that in his next birth Kamdev will be born as the son of Lord Krishna and Rati will marry him.

According to the boon, he was born to Lord Krishna and Mata Rumani. But when he was a child, he was kidnapped by the demon Sambara and he was thrown into the sea, and subsequently he was swallowed by a fish, and when the fish was cut and opened, he was brought to the demon sambara’s place. There he was took care by a maid in Sambara’s palace. When Pradyumna grew up, he fought with the demon Sambara and killed him using a powerful divine weapon. Soon he went back to his palace and stayed with his father Krishna and was very much liked by the people of Dvaraka, due to his good qualities.

Later he married Princess Mayavati, the incarnation of Kamadeva’s wife Rati, and the daughter of his uncle, Rukmi.

He along with his family lived their life in a proper manner, and at the end of dwapara yuga, and before the beginning of kali yuga, all the yadavas including pradyumna and Lord Krishna’s lives come to an end.

After his death, he merged with Kamadeva, and started doing his work in the heaven, and his wife also merged with rati devi and both of them are living in the heaven (INDRA LOKA) in a pleasant manner.

Being a divine avatar of Kama Deva, he looks attractive and contains all the good qualities of his father Lord Krishna, and was liked by everyone. He was a soft natured person, who treated the people of dwaraka in a kind manner, and respected the elders.

He also contains the knowledge of divine scriptures and also mastered in all forms of art, and was trained by Lord Krishna with regard to the proper administration of the kingdom.

Let us worship the divine avatars and be blessed.