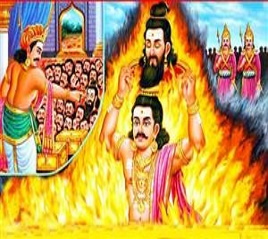 Pugal Chola Nayanar was the king of the chola dynasty and was one among the 63 Nayanars. He was an ardent devotee of Lord Shiva, who ruled his kingdom with the blessings of Lord Shiva, and took care of his people in a well versed manner. He donated food and clothes to the poor people and to the shiva devotees. He also properly maintained the temples in his kingdom, and conducted regular pujas and performed abhishekhams to Lord Shiva.

Pugal Chola ruled Tiruchirappalli with much devotion on Lord Shiva. Pugal Chola is described as a great king who ruled his kingdom in a proper manner. Shaivism was flourished throughout his region. Once, he visited Karur. His royal elephant seized the flower basket from the hands of a shiva devotee. On seeing the incident, a great nayanar saint, Eripatha murdered the elephant and the elephant guard. After Pugal Chola got the news about the murders, he went into the spot and enquired about the incident. Eripatha told the entire incident. Pugal Chola asked the Nayanar to kill him since he is the ultimate responsible person for that region. Eripatha got astonished with the good act of the king, and he tried to kill himself with his sword. Lord Shiva appeared before them and granted his blessings and brought back the life of elephant and the guard.

Once, Pugal Chola fought with the king Adiyaman and was won in the battle. Pugal Chola had a glimpse of the severed heads of the enemy soldiers in the battle field. Among the soldier’s head, he saw the head of a shiva devotee. Hence he decided to commit suicide, and he crowned his son as the king, and took the head of the devotee in a vessel on his head. He chanted the Shiva Panchakshara mantra and fell into the fire and was died. Immediately he reached the holy abode of Lord Shiva, the kailasa for his sincere devotion on Lord Shiva.

He is specially worshipped in the Tamil month of Aadi, and also worshipped as a nayanar in the shiva temples.

His sincere shiva bhakti had given him to reach the holy “KAILASA”. He had given very good respect to the shiva devotees. He had sacrificed his life, towards killing an innocent shiva devotee by his soldiers. His greatness will never be forgotten by the people, and his noble act would always remain in the mind of the people.

Let us worship the great nayanar and be blessed.