In: Blessing Messages, Spirituality
With: 0 Comments 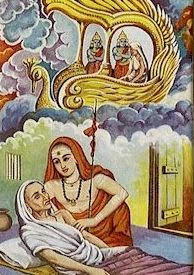 INTRODUCTION
Aryamba(8th century AD) was the holy mother of Sri Adisankara, and she was born in a Brahmin family, and at her younger age she got married with a pious Brahmin scholar Shivaguru, and had one son, who was later famously known as Jagadguru Sri Adisankaracharya. Sankara’s father was died at his childhood, and he was brought up by his mother in a proper manner. At his younger age itself, he has performed miracles like changing the course of the river for the sake of his mother, and removing the illness of a Shiva Devotee, and making the impure persons to become pure etc.
Sri Sankara had learned all the divine subjects and was well versed in Vedas, Shastras and other Holy scriptures. At his younger age itself, Sri Sankara felt the need to become a saint, for the wellness of the mankind, but his affectionate mother Aryamba, doesn’t wants to separate herself from her only son. But Sri Shankara had got permission from his mother, to become a saint, when a crocodile had tried to kill him. Aryamba doesn’t know any other way, and hence she has given permission to her son to become a saint.
Due to his spiritual powers, he arrived to his birth place Kaladi and visited his mother at her death bed, and consoled her and chanted Lord Shiva’s holy mantras on her ears, and gently rubbed the body of his mother in his hands. Due to that, his mother was freed from her sins, and has attained SALVATION.
Let us worship the holy mother Aryamba and be blessed.
“OM MATA ARYAMBA NAMAHA”
“OM SRI ADISANKARARE NAMAHA”
“JAI SHIVA SAKTHI”
WRITTEN BY
R.HARISHANKAR