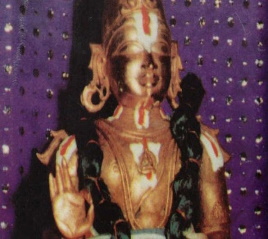 Sri Parasara Bhattar, is the son of Sri Kurattazhwan and Andal, and considered as an important person among the Vaishnavites. It is believed that he was born due to the grace of Sri Ranganatha, a form of Lord Vishnu, and Sri Ramanuja. He was affectionately named as Parasara Bhattar by Sri Ramanuja himself.

Parasara Bhattar was a born genius. Even at his younger age, he won in the debate with the famous scholar Sarvajnya Bhattar. He was guided and educated under his father Sri Kurattazhwan and Swami Embar.

After he grown up, he has become the chief priest of the Sri Ranganathaswamy Temple, Srirangam, and he administered the temple in a proper manner, and conducted regular pujas and offered naivedyam (Holy Prasad) to the god, and distributed it to the devotees. He was affectionate and kind with all others. He also helped the poor people, and provided free food to them. Everyone has praised about his great devotion on the god, and worshipped him as a divine boy. He won several scholars in the debates. His main disciple is Ranganatha who was also known as Nanjiyar and is considered as an obedient and a perfect disciple of Sri Parasara Bhattar. He also made a commentary of Thiruvaymozhi, the divine songs of Lord Ranganatha.

Parasara Bhattar travelled to Thirukkottiyur, and worshipped Lord Sowmya Narayana Perumal, and after some time he returned to srirangam.

Sri Parasara Bhattar has dedicated his entire life towards doing service to Lord Ranganatha and to Sri Ramanuja.

Parasara Bhattar is the spiritual successor of Sri Ramanuja, and lived a pious and a noble life. He occupies an important part in the lives of the Vaishnavites, who are considering him as their guru, next to Sri Ramanuja.

He was a great saint, poet and an ardent devotee of Lord Ranganatha, who got great spiritual powers, and used his powers for healing the sinful people, and he removed the bad thoughts in their mind, gives great spiritual energy, wisdom and washed out their sins, through his great divine power. Similar to his father Kurattazhwan, he was a humble and a calm person, who always used to do goodness to others. He was praised by the kings and by the common people.