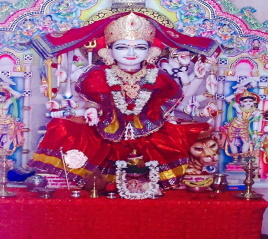 Suswani Mata is regarded as an avatar of Parvati Mata and worshipped by Jain and Hindu community devotees.

Her main temple is located at Morkhana in Bikaner district of Rajasthan. The temple was constructed in 12th century AD.  There is an ancient Shiva Temple situated nearby the main temple.  She is worshipped as Kuladevi by many families in rajasthan.

The Suswani Devi temple is constructed out of marble stones and various statues of other gods were also found inside the temple premises.

Suswani Mata  was born to Jain couples in 1219. She looks very beautiful. Due to her beauty, the nawab of Nagaur fell in love with her. He expressed his wish to her parents. But her parents were rejected his proposal. This made nawab to get angry with them and imprisoned her parents. Mata Suswani prayed to Lord Shiva and sought for his help.

In her dream, Lord Shiva appeared and blessed her. The next day morning, she came out from her home and started going to a shiva temple. The nawab also followed her. While nearing the temple, the earth was opened and she went inside the earth and disappeared and merged with Lord Shiva. The nawab felt ashamed for his act and returned from that place and also freed her parents from the prison.

Due to the instructions given by Mata Suswani to one of her relatives in his dream to construct a temple for her, her temple was built after her departure from the earth. It was later renovated and reconstructed and now the temple structure looks very good. Visiting her main shrine would definitely fetch good results in our life. Let us try to visit her holy temple at least once in our life time and can have the blessings of the divine mother.

By worshipping Mataji in her temples, would give us all the prospects in our life and we will have a bright future in our life. We can also chant her name “OM SREE SUSWANI MATAJI NAMAHA” and get her blessings. She is the divine protector of the entire universe. Our all sufferings would turn into happiness, and our various health related problems would be relieved through the greatness of the divine mother. By worshipping her with sincere faith, we would get better prospects in our life.