Located in Eastern Delhi on the banks of the River Yamuna, the Swaminarayan Akshardham temple was inaugurated on 6th November, 2005 in a 30 acre complex. The Akshardham Temple,  recently recognized by the Guinness Book of World Records, is the largest Hindu temple in the world. The temple premise is about 86,342 sq. ft. in area, 356 feet in length and 141 feet in height. The Akshardham temple showcases the rich cultural tradition and religious values with great fervor. The word Akshardham literally means the abode eternalizing the virtues of Akshar i.e. the Vedas and the Upanishads. The temple is built of pink Rajasthani sandstone and Italian Carrara marble. Usage of steel has been strictly avoided for construction purpose. The temple is also referred to as the devotional Disneyland, owing to the light and sound show, the 3D show and the elegant exhibition halls.

Both the Akshardham temples in Gujarat as well as Delhi, worship the great 18th century saint Swaminarayan as the principal deity. The 11 feet high gilded statue of Swaminarayan, located in the main shrine of the Akshardham temple in Delhi, is a visitor’s delight. The deity has been built as per the strict ancient Vedic principles of the Pancharatra Shastra and Vastu Shastra. Other idols of deities such as Sita-Ram, Radha-Krishna, Parvati-Shiva and Lakshmi-Narayana are made of Pancha Dhatu (An alloy of five metals). The temple has been blessed by the spiritual successors of Swaminarayan such as Shastri Maharaj, Akshar Brahman Gunatinand Swami, Bhagatji Maharaj, Yogiji Maharaj and the current Pramukh Swami Maharaj.

The book Swaminarayan Akshardham:Making & Experience encapsulates the ideas and ideals which inspired the building of the Swaminarayan Akshardham. Lord Swaminarayan was believed to be an incarnation of the Lord himself. He could transport many people to a state of spiritual trance, which would enable them to have visions of Lord Krishna and Rama. In his book The Book of Ethics, written in 1826, Lord Swaminarayan stressed upon the principles of “No meat. No alcohol. No adultery. No theft. No lawlessness. No violence. No exploitation’. Respect for all religions and Attachment to devotion”. Lord Swaminarayan directly initiated five hundred Paramhansas or saints of the highest spiritual order, so that they could promote and disseminate the principles of peace and love in the world.

The Akshardham Temple tries to mimic the experiences and the teachings of Lord Swaminarayan through 3D events, Fiber Optics show, images and dioramas.

The Akshardham Temple in Delhi has been aptly described as, “a place for cultural education and entertainment”. It is one of the most visited cultural sites of Delhi and is extremely significant as a shrine of Hinduism. The Akshardham Temple captures and reflects the salient aspects of Hinduism as a religion. It helps in promoting and preserving the cultural aspects of Hinduism, whereby all are welcomed to the temple irrespective of caste, creed, race, nationality and belief. The numerous facets of Hinduism are visually showcased in the temple premises. 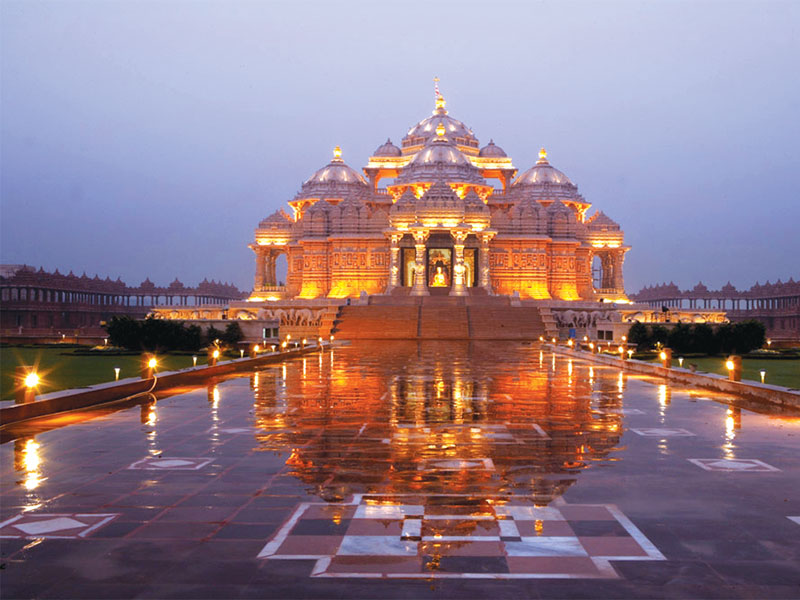 The Akshardham Temple in Delhi is constructed with Pink Rajasthani Sandstone and White Carrara marbles. The color pink symbolizes bhakti in eternal bloom and the color white symbolizes purity and peace. No steel has been used for the construction of the temple. The 11 feet high inner sanctum of the temple consists of the murtis of the following:

The temple also consists of the following:

The external wall of the temple is a unique exhibition of saints, sadhus, acharyas, divine incarnations and devotees. Also known as Mandovar, the wall measures 611 ft. x 31 ft. The relief panel made of bronze defines the incidents related to the life Lord Swaminarayan.

The Gajendra Pith is a unique tribute to the elephant and legends associated with it. Extending to almost 1,070 feet, the Gajendra Pith has 148 full sized elephants and 42 other birds and animals, weighing almost 3,000 tonnes. The pith also has 125 human sculptures in it.

The Narayan Sarovar, a sacred lake, surrounds the Akshardhan temple. The lake contains the waters of one hundred fifty one sacred rivers which were sanctified by the Lord Swaminarayan. The Narayan Sarovar is surrounded by 108 Gaumukhs which symbolizes the 108 names of the Gods. Fully bloomed Lotus flowers adorn the Lake.

Hall Of Values: Also known as the Sahajanand Pradarshan, is a hall which displays the life-like robotic replicas and dioramas. The events of the life of Swaminarayan are portrayed through the usage of dioramas and life-like robotics. The splendid fusion of spirituality and technology showcases the message of modesty, peace, harmony and devotion to God. The hall is also host to the smallest animatronics robot in the world i.e. Ghansyam Maharaj (Lord Swaminarayan as a child).

Nilkanth Kalyan Yatra: It is a hall with an 85’x65’ giant screen which displays the epic pilgrimage of the 11 year old Ghanshyam Maharaj across India for pilgrimage. Outside the theatre there is a large 27 ft. high statue of Neelkanth Varni.

Sanskruti Vihar: The Sanskruti Vihar is a 10 minute boat ride which traverses the replicas of University of Takshashila, Ancient hospitals, chemistry laboratories, ancient bazaars and the Ajanta-Ellora caves. The boats are shaped like peacocks and the journey ends with a message for the future of the world.

Yagnapurush Kund / Musical Fountain: The Yagnapurush Kund or the musical fountain is a magnanimous combination of Vedic Yagna Kund and a musical fountain. The Yagna Kund, measuring 300’x300’ is the world’s largest Yagna Kund and consists of 2870 steps along with 108 m small shrines. Designed in accordance to the Jayaakhya Samhita of the Panchratra scripture, an eight petalled lotus shaped yagna kund lies at the centre of the garden. At night the colorful water fountain dances in rhythm with the ancient Vedic sentiments.

Yogi Hraday Kamal: It is basin shaped garden, which has been structured like a Lotus. The garden is host to quotes from famous personalities of the entire world.

Night Lighting – only on Saturdays and Sundays

3-4 hours. It is best to visit in evening time.