The city of Allahabad is among the largest cities of Uttar Pradesh and situated at the confluence of three rivers- Ganga, Yamuna and the invisible Saraswati. The meeting point is known as Triveni and is especially sacred to Hindus. The earlier settlements of the Aryans were established in this city, then known as Prayag”

All sins are cleaned with entry in Prayag (the ancient name of modern Allahabad) PRAYAG is one of the historic and legendary cities of India with a glorious past and present. It continues to enjoy the distinction of being a place of haunting and lasting memories. It is a city of mixed culture of Hindu, Muslims, Jains and Christians.

Its sanctity can easily be understood as there are references to it in the Puranas, in the Ramayan and the Mahabharata. According to Hindu Folklore, Lord Brahma, the creator God of the Trinity, chose a land on earth(ie Prayag) to perform ‘Prakrista Yag’, at the beginning of creation and he also referred to it as Tirth raj or the King of all pilgrimage centres’ According to the ‘Padma Puran’ – “As the sun is amongst the moon and the moon amongst the stars, likewise ‘Prayag is best amongst all places of pilgrimage”  The Brahma Puran says – “Bathing at Prayag in the month of Magha at the bank of Ganga Yamuna bestows results equal to millions and millions of Ashvamedha Yajna.”

Prayag is the birth place of Som, Varuna and Prajapati. Prayag has been associated with mythological personalities in Brahmanical(Vedic) and Buddhist Literatures. It was the seat of the great sage Bhardwaj, sage Durvasa and Sage Pannas. Sage Bhardwaj lived here circa 5000BC and taught more than 10000 disciples. He was the greatest philosopher of the ancient world.

The Present Jhunsi area very close to sangam was the kingdom of Chandrabanshiya (lunar clan) king Pururava. Nearby Kaushambi bloomed to prosperity during Vatsa and Maurya Rule. The earliest monument of antiques Ashok Pillar with inscriptions of third century B.C. bears King Ashoka’s directions to his fellow Rajas and also praises King Samudragupta. The Chinese traveler Huan Tsang in 643 BC found Prayag inhabited by many Hindus who regarded the place very Holy.

1575 AD Emperor Akbar impressed with the strategic importance of the SANGAM founded the city by the name of “ILLAHABAS” which has now become ALLAHABAD meaning “The City of Allaha”. In medieval India the city enjoyed the honour of being the religio-cultural center of India. For a long time it was the Provincial capital of the Mughals. Later it was captured by the Marathas. 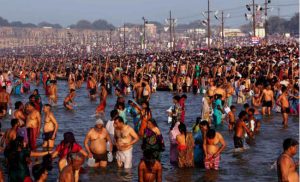 This city was the heart of the Indian Freedom Movement against the British rule with Anand Bhawan being the epicenter. It was in Allahabad that Mahatma Gandhi proposed his program of non-violent resistance to liberate India. Allahabad has provided the largest number of prime ministers of Post independence India Pt. Jawahar Lal Nehru, Lal Bahadur Shastri, Indira Gandhi, Rajiv Gandhi, V.P. Singh. Former Prime Minister Chandra Shekhar was a student of Allahabad University.

Allahabad is basically an Administrative and Educational centre. The High Court of Uttar Pradesh, Auditor General of Uttar Pradesh, Principal Controller of Defence Accounts (Pension) PCDA, Uttar Pradesh Madhymik Shiksha Parishad (UP BOARD) office, Police Head Qtrs are all located here. In the field of education we can find institutions like Moti Lal Nehru Regional Engg. College MNREC, Medical and Agriculture College, Indian Institute of Information Technology (IIIT).  ITI Naini and IIFCO Phulpur, Triveni Glass are some of major industries here. The Government of India has selected Allahabad as one of the mission cities for the Jawaharlal Nehru National Urban Renewal Mission, with the goal of improving urban infrastructure, efficient governance and basic services to urban citizens.

From the days of civilization Allahabad has been a seat of learning, wisdom and writing. It is the most vibrant, politically conscious and spiritually awakened city of India.

Allahabad is one of the fastest growing cities in India at present. It is located 205 kilometers (127 mi) south of the state capital Lucknow. The ancient name of the city is Prayag (“place of sacrifice”) and is believed to be the spot where Brahma offered his first sacrifice after creating the world. It is one of four sites of the mass Hindu pilgrimage Kumbh Mela, the others being Haridwar, Ujjain and Nashik. It has a position of importance in Hindu scriptures for it is situated at Triveni Sangam, the confluence of the holy rivers Ganges and Yamuna and the ancient Sarasvati River.

The Prayag (Allahabad) Kumbh Mela is the largest and holiest of all melas and is believed to be the most auspicious. On important bathing dates, lakhs of pilgrims take bath on the banks of the holy Sangam. The Purna (complete) Kumbh or Maha Kumbh, the biggest and the most auspicious fair, which falls once every 12 years, is always held in Allahabad. Ardha Kumbh Mela is held every 6th year and the Magh Mela is the annual version of the Kumbh. The main bathing days are known as ‘Shahi Snans’ or ‘Royal Bathing Days’.

The most recent Kumbh Mela was in 2013 in Allahabad and millions of pilgrims took a holy dip in Sangam on the auspicious Mauni Amavasya. The main bathing days for the Kumbh Mela are: Makar Sankranti, Paush Purnima, Mauni Amavasya, Basant Panchmi, Maghi Poornima and Maha Shivratri.

Sangam: It’s the place where the confluence of three holy rivers-Ganga, Yamuna, and Saraswati takes place. Center of attraction for hundreds and thousands of religious travelers

Allahabad Fort: Built by Akbar in AD 1583, this fort exhibits fine depictions of art, design, architecture, and craftsmanship of the fort

Patalpuri Temple and Akshaya Vat: Located inside the Allahabad Fort, this is actually an underground temple dedicated to Lord Rama.

Anand Bhawan: the ancestral home of the Nehru’s, the Anand Bhawan now has become one of the excellent museums of India.

Allahabad Museum: the Allahabad Museum preserves the paintings of Nicholas Roerich, terracotta figurines, Rajasthani miniatures, coins and stone sculptures from the 2nd century BC till date.

How to Reach Allahabad

Allahabad is the headquarters of the North Central Railway Zone, and is well connected by trains with all major cities in India.

The major trains between Delhi to Allahabad are:

The major trains between Mumbai to Allahabad are:

The major train between Chennai to Allahabad is:

The major train between Bangalore to Allahabad is:

The major trains between Guwahati to Allahabad are:

NH2 runs through the middle of the city. NH96 connects NH28 at Faizabad. Another is NH27 which starts from Allahabad and ends at Mangawan in Madhya Pradesh connecting NH7. There are other state highways that link Allahabad to all other parts of the country.