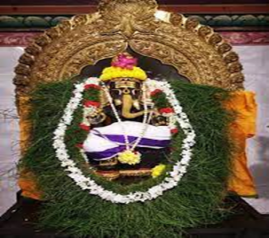 There is a nice Muchandi Vinayaka temple in Chennai, which is dedicated to Lord Vinayaka, and it is situated in Pudu Nagar Cross Street, Ayanavaram, chennai – 600023. Though it is a small temple, but the powers of the deity present inside the temple is very high. This temple was built by the devotees of Lord Vinayaka after they have got a dream, and in that, they also had the vision of the Lord. During the Puranic period, Lord Mahorkada, an aspect of Lord Vinayaka had visited the present place of the temple, and stayed here for some time. According to the legend, it is also believed that sage Purushundi, a staunch devotee of Lord Vinayaka had visited this sacred place during the Treta Yuga, and performed meditation on Lord Vinayaka for a few days.

During the Chaturthi days and on the auspicious Vinayaka Chaturthi festival day, lot of devotees from all parts of North Chennai would visit this beautiful temple, in order to have a glimpse of their beloved deity Lord Vinayaka. Devotees used to buy Arukampul and other flowers, from the puja shops present nearby the temple, and used to adorn it to Lord Vinayaka. Some devotees would also adorn small dhotis to the idol of Lord Vinayaka, in order to show their love and respect on him.

Muchandi means the corner of the three streets. When Vinayaka temple is constructed at the corner of the three streets it is known as Muchandi Vinayaka Temple. Visiting and worshipping Lord Vinayaka at the Muchandi Vinayaka Temple would fetch good prospects in our lives, and we would be relieved from unknown diseases, black magic problems and from enmity problems etc.

There are lot of Vinayaka Temples situated throughout India. Lord Vinayaka gives immense happiness to us, and would immediately relieve us from our sufferings. Since Lord Vinayaka is considered as the first god, by worshipping him itself we would get all kinds of prosperity in our lives, and we would get the blessings of all other deities also.

Lord Vinayaka in his avatar had destroyed powerful demons like Gajamukasura and restored peace in the universe. He is very fond of Mothagams, which means Kozhukattais, and by offering the delicious Kozhukattais to him during the Vinayaka Chaturthi festival day, would please him, and he would grant boons and fulfils our reasonable wishes.