In: Ashtvinayak, Travel
With: 0 Comments

The temple of Ballaleshwar at Pali is one of the most eminent amongst the eight Ashtavinayakas. The temple is the only of its kind which is named after his devotee Ballal. Being pleased with the devotion of Ballal, Shri Ganesh remained in the form of stone which was propitiated by Ballal and the place began to be known as Ballaleshwar of Pali. He is also known as Ballalavinayaka.

Location of the Temple – Village Pali belongs to Sudhagad taluka in the Raigad district. It is flanked by the fort Sarasgad and Amba River.

Legend of the Temple – The legend of this temple can be traced back to Ganesha Purana and Madgal Purana.

In the Krita Yuga, in the Pallipura village there lived a rich merchant named Kalyan Sheth whose son, Ballal, was a great devotee of Lord Ganesha. The young Ballal had installed a stone, symbolizing Lord Ganesha, in the nearby forest. Ballal spent most of his time worshiping the Lord and his devotion also inspired his friends to propitiate the deity. However, his friends’ parents started feeling that their children were unnecessarily drawn into Bhaktimarg (the path of devotion) at a tender age. They also asked Ballal’s father, Kalyan, to put certain restrictions on his son. 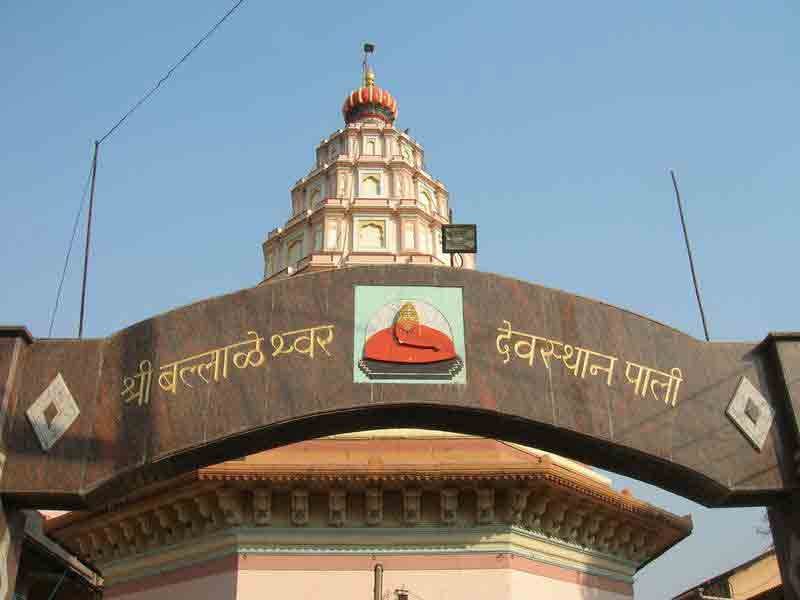 Upon facing severe criticism, Kalyan’s anger towards his son accelerated and he decided to teach Ballal a lesson. He went to the forest and found Ballal completely engrossed in Ganesh dhyanam. Despite understanding his son’s endless devotion for his Lord, the fuming Kalyan disrupted the puja and threw tantrums at his son. The angry father then tied up his son avowing that Ganesha himself rescue his son from this situation. Lord Ganesha indeed appeared before the struggling Ballal and released him from the bondage. When Ganesha granted Ballal a boon he, without any delay, asked the Lord to make Pallipura his abode. The Lord assented to the devotee’s request and rested in a stone which is now propitiated as Ballaleshwar Vinayak. The earlier idol of Ganesha was also installed alongside.

Temple Architecture – Mr. Baburao Phadnavis and his son Moroba Dada Phadnavis converted the original wooden temple into a stone temple in the year 1770, for its better lasting and protection. Two lakes are

streamed on both sides of the temple while one of them is exclusively meant for bathing Lord Ganesha and following pious rituals.

This Temple is eastward facing and includes two beautiful sanctums. At Ballaleshwar, the idol of the deity is depicted enthroned on a Cyprus tree shaped seat. This divine view is complimented by eight exquisitely carved pillars in the eight directions of the shrine.

The temple is of Shreekari style which means in a shape like the letter ‘Shree’ in the Devnagiri script. Due to unique temple architecture, during southern declination of the sun, the rays of the sun fall on the idol of Lord Ballaleshwar.

Idol of the deity – Out of the two sanctums, the outer sanctum depicts Mooshaka idol of Ganesha where a mouse is placed facing the deity and grabbing a modak in its paws. The idol of Ballaleshwar is placed inside in the other sanctum. The east facing idol is 3 feet in height and is extremely beautiful with its trunk turning towards the left side. Valuable stones are engrained in the eyes and naval of the idol.

As the legend associates Lord Ganesha to a Brahmin, the appearance of the Lord is fully presented in a Brahmin’s attire. Two lovely statues of Riddhi and Siddhi also appear flanking the Lord.

·         During the waxing period of the month Bhadrapad (Hindu calendar); from the first (Pratipada) to the fifth (Panchami).

·         During the waxing period of the month Magh (Hindu calendar); from the first (Pratipada) to the fifth (Panchami).

In both the months of Bhadrapad and Magh, a series of festivities are organized; kirtan, cultural activities and important religious discourses take place in the temple area. On the day of Ganesha Chaturthi i.e. on the fourth day of Bhadrapad, a Maha Bhog (Grand food offering) to the Lord is performed. There is an old, yet popular belief that God personally takes the food being offered to him and the impression of his fingers can also be traced on the offerings. On the day of Chaturthi, people in thousands throng the temple to witness this sacred phenomenon. In the month of Magh, again a five day Ganesha festival is observed where the Palkhi (palanquin) of the deity is carried around the city of Pali accompanied by a large procession.