Literally meaning ‘son of Brahma’, the Brahmaputra is the largest river of India. It even surpasses the mighty Ganges and is one of the greatest rivers of South Asia. The river is almost 1800 miles in length.

The river Brahmaputra is known by three different names. They are:

The river is believed to symbolize a multiplicity of ethnic groups and social strata it crosses. It essentially demonstrates the fusion of caste, creed and religion.

The Brahmaputra drains a massive area of almost 9, 36,800 sq. km. From the commercial perspective, the river has immense significance.

The Brahmaputra traverses a distance of almost 2,900 km from its origin. It passes through the Kailash range of the Himalayas to the deltaic regions of Bangladesh. It flows through three nations i.e. China, India and Bangladesh. However, its watershed area covers Bhutan, Nepal and Myanmar. The river has a very steep gradient, from the Tibetan Plateau to the valleys of Northeastern India. The Brahmaputra later confluences with the River Ganga and the River Meghna, to form the largest deltaic region of the world.

The River Yarlung Tsangpo (Tibetan name), is born out of the Jima Yangzong glacier near Mount Kailash. In the eastern end, the river courses around the Mt. Namcha Barwa to form the Yarlung Zangbo Grand Canyon.

Numerous stories and legends are directly attributed to the River Brahmaputra. The most popular and established among them is about the birth of the river itself in the Kalika Purana. It was in this very river that Lord Parshuram (an incarnation of Lord Vishnu) had washed away his sins, after beheading his own mother. The spot has been named as the Parashuram Kund.

Another mythological account about the river states that, Amogha was blessed by Lord Brahma to have a child. When Sage Shantanu placed the child in the midst of four great mountains, a huge lake was created called Brahmakunda.

As per the legend, there was a huge reservoir of water on the Chang Tan plateau. The Bodhisattva (enlightened being) decided to utilize the water for human welfare. Thus, he cut out a route for the water and created the Tsangpo (Great River). The path through which the river flows is believed to be extremely holy and is also believed to be a doorway to the Shangrila.

As per the legend, Parashurama ploughed the soil to entrench a path for the flow of water. At a place called Sonargaon, he rested his plough and thereafter, this place was named Langalbandh. Langalbandh is regarded as an extremely holy place. It is also believed that Langalbandh is the very place where Balarama (Krishna’s brother), had made the three rivers i.e. Brahmaputra, Laskshya and Dhaleswari meet.

Another legend goes on to add that Parashurama used a plough to further furrow the soft soil to make a path for the waters to flow to the plains. Tired he stopped at a place near Sonargaon. Here his plough or ‘Langal’ came to a standstill or ‘bandh’, and this place came to be known as Langalbandh. This is considered to be a very holy place to round of a pilgrimage with a dip in the Brahmaputra.

Alternatively, Balarama, Krishna’s brother committed the sin of killing many Brahmins. To wash off his sins, he went on a pilgrimage and visited the confluence of the rivers Brahmaputra and Laskshya. He used his plough to get them to flow and meet yet another river the Dhaleshwari. As this was the place where the plough stopped, it was called Langalbandh.

Another legend states that once Brahmaputra wanted to marry Ganga. To test their love, Brahmaputra acquired the form of an old woman and came before Ganga. When she was unable to recognize him, Brahmaputra parted with Ganga and allowed Jamuna to join him.

A long time ago, Tezpur in Assam was called Sonitpur. Banasura, ruler of Sonitpur, had a beautiful daughter named Usha. Banasura had kept Usha in a secluded place to avoid her from marrying against his choice. Chitralekha, one of Banasura’s minister’s daughters, was a companion of Usha. She was also adept in magical charms. Chitralekha drew the image of Usha’s dream man and identified him as Aniruddha (Krishna’s son). Chitralekha carried Aniruddha while he was asleep and made him marry Usha. Upon learning about this marriage, Banasura tied Aniruddha with snakes. When Krishna learned about this, he directly confronted Lord Shiva (Banasura was a devotee of Lord Shiva) in a battle. Huge destruction took place and the whole city was drenched in blood. In the end, Banasura retired after losing his arms and Krishna returned to Dwarka along with Aniruddha and Usha. Thus the place acquired the name Tezpur (Teza- Blood + Pura- City). 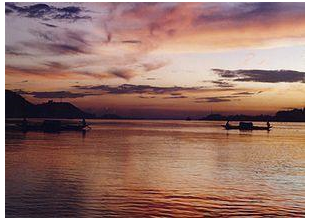 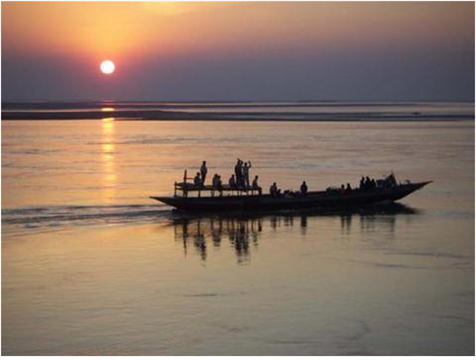 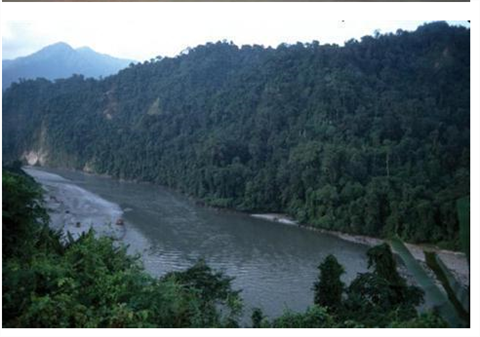 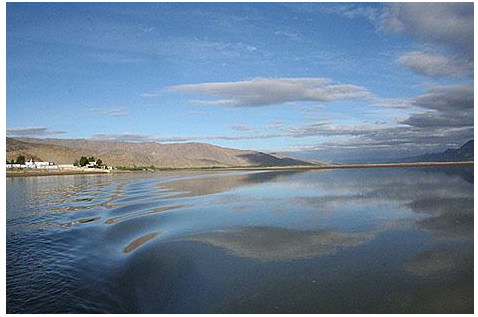