Dwarka is an ethnic city of India which is most famous for its ancient temples and impressive customs running down through ages. Millions of Hindu devotees visit this place all around the year for seeking spiritual enlightenment. The place holds great mythological relevance as the kingdom of Lord Krishna which flourished during the Dwapara Yuga. Many ancient scriptures describe Dwarka – the earthly kingdom of Lord Krishna – as an ideal place for the devotees who are seeking salvation. It is the third of the Char Dham Pilgrim centres as mentioned in Hinduism.

A bevy of lovely shrines engulf the city of Dwarka portraying marvelous architecture for which the place has grabbed attention of many international archeologists and historians alike. As per the ancient tales, the city of Dwarka was completely drowned in water after the death of Lord Krishna. In support of this legendary faith, very recently, archeologists have excavated the remnants of ancient well-planned cities which once existed on the shores of River Gomati.

The significance of the city of Dwarka grew manifold after the 8th Century CE Hindu philosopher Adi Shankaracharya established one of his four monasteries (Amnaya Mathas) at Dwarka. Archeologists have maintained that Dwarka enjoyed the status of an established township during the 400 BC. Many original temples were demolished by the Muslim invaders and from 11th Century AD through 15th Century AD the whole of the city faced off and on ravages and atrocities of the Mughals. Many temples were demolished and reconstructed during this time. A well known temple here is the temple of Jagat mandir (Sri Dwarkadish) which dates back to 15th Century AD. The temple is the spiritual abode of Sri Ranchhodrayji. It is built upon 72 pillars and is around 52 meters in height covering five storeys. Marine archeologists have dated Dwarka’s original township to the 15th Century BC and have simultaneously maintained that its remnants still lie at an underwater depth of 40 m.

It is said that Lord Krishna moved to the auspicious city of Dwarka for the well being of all Yadavas leaving Magadha. To make it a perfect capital, Lord Krishna even reclaimed 12 yojana of land from the sea. The Vishnu Puran narrates that for constructing his divine, fortified capital of Dwarka, Lord Krishna had to acquire 12 yojans (16 miles) of earth from the sea. Lord Krishna instructed Vishvakarma, an architect to build the city. The city remained Lord Krishna’s home or karmabhoomi as he eloped with Rukmini, married Satyabhama, vanquished Narkasura, saved Draupadi’s honor and led the battle of Kurukshetra (Mahabharata).

It was golden era during Lord Krishna’s regime in Dwarka. Arrogance of Yadavas witnessed the downfall of Dwarka. At Prabhash Kshetra (Somnath) and samudra Lord Krishna ended his earthly journey. It is said that the sea reclaimed the land it had given to Krishna, sparing only Lord Krishna’s home. And thus we have lost Dwarka to the sea.

According to historians, the present temple was renovated between 1593 and 1606 during Mughal Emperor Akbar’s regime. However some claim that it is 1200 years old. The Dwarkadheesh temple is the main focus of the Dwarka typography. The present temple structure is 7 floored and 45 feet high above sea level. The huge temple premises have four parts. For a devotee the centre of attraction is 52 yard Dhwaja. The 52 yard long saptarangi dhwaja (seven primary colors flag) is hoisted four times daily.

Dwarkadheesh temple is also known as Triloksundara temple. The Chalukya style temple has been constructed with locally procured stone that looks like it is hewn due to the effect of saline air. Devotees generally enter via main gate or Moksha Dwar. Traditionally, they are required to have a bath in the river Gomti, and enter via Swarga Dwar entrance. This is on Gomti river side which flows behind the temple. One has to climb 56 sidis (56 steps).The 56 sidis (steps) have religious significance. It is indicative of 52 Yadava administrative divisions and four gods-Krishna, Balaram, Pradyuman and Anirudhha.

The main deity is Lord Dwarkadheesh or Lord Krishna. It’s a black idol. It has an interesting story. In the year 1540, the idol of Dwarkadheesh was installed by Shri Vallabhacharyajee at Ladva village; the same idol was earlier propitiated by queen Rukmini. During those days the idol of the deity was supposed to be concealed in the step well called Savitri vav to guard it from Muslim aggression. So when Shri Vallabhacharyajee saw the temple without idol, he kept it there. It was there up to 1551. During the same period when Turk Aziz attacked Dwarka the idol was taken to Bet Dwarka. After some years the idol was established in the temple.

Some people also believe that in the year 1559, Shankaracharya Shri Anirudhacharya had made the idol at Dungarpur and established it in another room of the temple after renovating the whole temple. 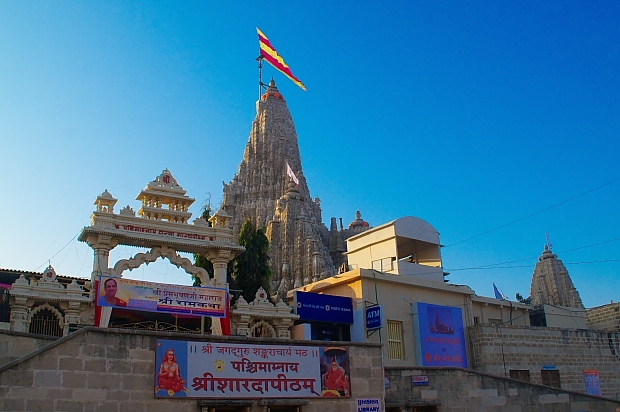 Dwarkadheesh temple is also known for its 52 yard long Dhwaja or flag. Devotees call it Dhwajaji or Shriji Dhwajaji. It is probably the longest flag in the world and it is hoisted four times a day. The Dhwaja is usually made of silk though there have been flags cast in gold as well. One can get a dhwaja from shops around the temple.

The entire process from buying dhwaja to raising it on the temple cost around Rs 10,000. It includes dakshina to gugali brahmins. There is a heavy rush to offer dhwaja and it’s all booked for the next two years.

In the Dwarka of Lord Krishna era, administration was run by 56 koti yadavs. Here koti do not mean crores but indicates fifty-six divisions of administration. Out of fifty six administrators, Balaram, Lord Krishna, Pradumana & Aniruddha are incarnation of god which is also known as Chaturvyuha. This Chaturvyuha is considered as donor of purushartha, dharma, aarth, kama & moksha of human life. When the four main administrators are deducted from fifty six-koti, the remaining fifty-two koti denotes the residence of yadav administrators of the fifty-two divisions. 52 yards Shriji Dhwaja is nothing but remembrance & combined symbol of fifty two Dhwajas of different yadav koti tailored together and named as Shriji Dhwaja.

The birth of Lord Krishna i.e. Janmashtami is the main festival at the temple and is celebrated with great pomp and show. Devotees from different parts of India and abroad congregate here to get darshan and seek blessings of Lord Krishna. It is believed that Shriji (Lord Krishna) gives darshan to his devotees on this day amid the rituals performed by the special caste Aboti Brahmins who are in this profession since centuries.

Sharp at 7 a.m. in the morning daily rituals are performed like mangla arti, abhishek snan, shringar, shringarbhog, shringar arti, madhyahan bhog, rajbhog, anosar, utthapan at 5 in the evening, shayan bhog and shayan arti. The darshan is closed at 9:30 in the night.

During Janmashtami, Around 11 in the night Lord Dwarkadheesh darshan is again open for the devotees. Lord is dressed up with profuse gold jewelry and ornament studded with diamonds, topaz and valuable stones. Around 11:30 pm, the utsavbhog is offered to the Lord. The whole temple is crowded with devotees. The birthday is celebrated with great fun and devotees sing in chorus ‘Nand Gher Anand Bhayo- Jay Kanaiya Lal Ki’. At 2:00 p.m. noon the Mahabhog (annakut) is offered to the deity. The darshan is closed after offering the mahabhog around 3:00 p.m.

Besides being a Shankaracharya Mutt, and Sapta Puri, Dwarka is also famous as the spiritual destination of Meera Bai, one of the greatest bhakti saints and ardent devotee of Lord Krishna. As per the legend, Meera Bai renounced the world, left her husband Bhoj Raj, the powerful 16th century ruler, and arrived at Dwarka. Here, she explored Bhakti Yoga, her spiritual path, to evoke her deity Shri Krishna. During her final years in Dwarka, she wrote her immortal poems dedicated to Lord Krishna.