Kancheepuram in South India is referred to as the ‘City of Temples’. It is one of the seven great holy centres of ancient India and the nerve centre of Vedic schools. It was closely associated with the Pallava and Chola dynasty; it was a flourishing Buddhist and Jain centre and has been connected with a number of saints. It was a royal capital once and was a seat of art, trade, culture, education and religion. It invokes memories of a bygone era and is a famous place of visit for spiritual seekers, historians and tourists.

Kanchipuram Ekambareshwar Temple is one of the Pancha Bhoota Sthalas (which means the temples depicting the five elements earth, water, fire, air and sky), the deity worshipped here is Lord Shiva. The five elements are said to be enshrined in the five lingams and each of these lingams representing Lord Shiva have five different names based on the elements they represent. Here Lord Shiva is in the form of a Prithvi lingam(Lingam made out of sand) depicting the element Earth. 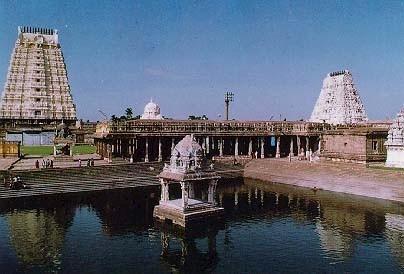 Initially the temple was built by the Pallavas and later pulled down and rebuilt by the Cholas. Adi Shankara got the temple remodeled along with the expansion of the temple with the help of local rulers. The Vijaynagar Kings especially King Krishna Deva Raya made a lot of contribution to the temple. Second century AD Tamil poetry speaks of the temple. There are inscriptions dated 1523 CE indicating gift of number of villages donated by the earlier Kings to this temple.

There are many legends associated with this temple 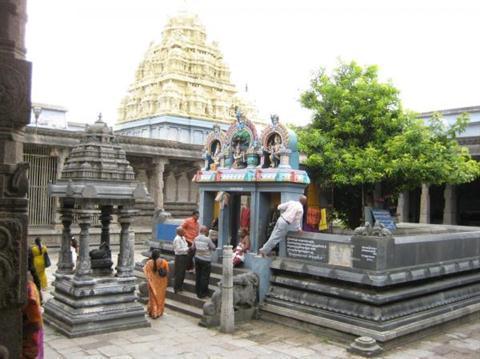 The Sthala Purana says that once Shiva was immersed in deep meditation when Parvati His consort in a jocular mood closed His eyes. This resulted in an obstruction to the process of the natural law of things as Shiva is one of the Trinity Gods and is involved in the creation and dissolution of the universe. This angered Shiva and he cursed Parvati to Earth where she had to do penance for her careless action. Parvati sat under the mango tree near the Vedavathi River and did penance there.

In order to test her Shiva hurled fire on her. Parvati prayed to her brother Lord Vishnu for help who in order to save her took the moon from Shiva’s head and cooled down the rays. Next Shiva sent the river Ganges to disrupt her penance. Parvati prayed to Mother Ganga to save her. Consequently Ganga did not disturb her penance and Parvati made a linga out of sand to propitiate Shiva under a mango tree. The Lord hence came to be known as ‘Ekambareshwar’ or ‘Lord of Mango Tree.’ The mango tree which is more than 3000 years old is known as the ‘Sthala Vruksha’ or Temple tree. Its four branches is supposed to represent the four Vedas and the tree is said to produce four different varieties of mangoes sweet, citric, spicy and  bitter in four different seasons. It is believed that childless women who take the fruit of the tree will bear children.

Another legend is that Parvati made a lingam out of sand called Prithvi lingam and when the neighbouring Vegavathi river overflowed and threatened to engulf the lingam Parvati in the form of Kamakshi embraced the lingam. Touched by the gesture Shiva materialized in person before her and married her. Hence he is referred to in Tamil as ’’Tazhuva Kuzhainthaar” or”He who melted in her embrace”

The poet saint Sundaramoorthy Nayanar is said to have recovered his eyesight (left eye) after having worshipped here. This temple is also part of the ‘Paadal Petra Sthalas’(the 275 temples that are revered in the verses of the Shaivite Nayanmar saints and are among the greatest Shiva temples of Tamil Nadu) and it is believed that many Nayanmar saints got liberated from the material world here.

Legend says that the deity once tested the faith of a simple but devout washerman of Kanchipuram Thirrukuriputhonda Nayaka by appearing before him as a poor, old Brahmin mendicant. Nayaka was so devoted to Lord Shiva that he spent all his time washing the clothes of the Shaivite pilgrims. The Lord (in the form of the Brahmin) gave him his dirty dhoti to wash asking him to keep it ready before the evening’s worship. Nayaka innocently agreed. The Lord then hid the sun so that Nayaka would be unable to know the time. Thinking it was already very late and he had been unable to get the dhoti ready on time, Nayaka out of desperation began to beat his head against his washing stone. The Lord in his infinite mercy and compassion appeared before him and rewarded him for his piety and devotion.

Architectural Details of the temple 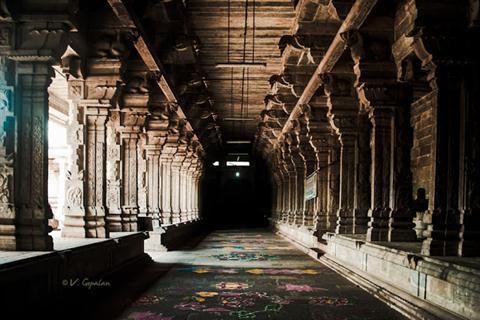 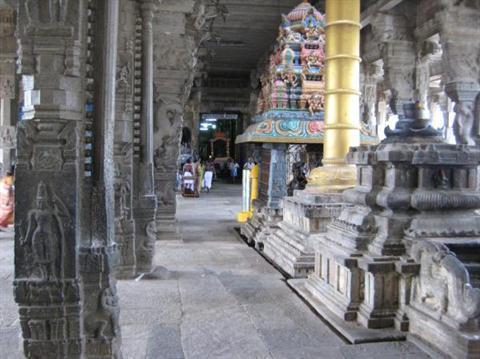 The temple covers an area of 40 acres. This vast temple with high rising gopurams (monumental towers usually ornate, at the entrance of any temple in South India)dominates the skyline of Kanchipuram which was the historic capital of the Pallavas. The entrance tower to the temple or the Raja Gopuram which rises to a height of 172 feet was built by the Vijaynagar King Krishnadeva Raya and is said to be the 5th tallest tower in Tamil Nadu. There is another smaller tower inside the temple called Pallava tower. The hallway with the thousand pillars’ or the ‘Aayiram Kaal Mandapam’ is one of the most notable features of the temple and was also built by the Vijaynagar Kings. A corridor surrounds the principle shrine which represents a sequence of receding piers. One hundred and eight lingams are installed in the first corridor platform of the temple (praharam).The images of Navagrahas are seen with their mounts or vahanas, a posture very rarely seen in other temples. There are the idols of the 63 Nayanmars. The temples inner walls are decorated with an array of 1008 Shiva lingams. There are two tanks in the temple Kampa Nadi and Shivganga. The campus is 25 acres with five courtyards or prakarams. The third courtyard contains a number of smaller shrines. The fourth courtyard contains a small Ganesha temple and a pond. The sanctum sanctorum contains the lingam along with the image of Shiva.

On entry into the temple, a Pancha Mukha Lord Ganesh and Lord Muruga with a five headed snake are found on either side of the entrance.

As in other Shiva temples, there is no separate shrine for Parvati. The Kamakshi Amman temple is considered the temple of the consort of Lord Shiva as Ekambareshwar. There is a small shrine of Vishnu (named Thiru Nillathingal Thundathan) inside the temple complex. Here Vishnu is in his avatar as Vamana Murthy and the shrine is praised by the Alvar Saints as one of the 108 Divya Desams. It was consecrated by the Saint poet Thirumangai Alwar It is one of the most important aspects of the temple as it is one of only two such Vishnu temples which is in the same precincts of the Shiva temple in South India the other being Govindaraja Perumal temple at Chidambaram. The temple has silver and gold plated Vahanams(vehicles) of great value.

A Somaskanda panel features Shiva, Parvati and Skanda on the rear of the main shrine. The symbol of Mother embracing the Linga is still visible. Opposite the sanctum sanctorum of Lord Ekambareshwar is the Sphatika Linga facing West and the Sphatika Nandi in the Prakara.

The three Carnatic music maestros Thyagaraja, Shyama Sastri and Muthuswami Dikshitar are said to have visited this temple and sung kirthanas here. All the four famous Shaivite saints Appar, Sundarar, Manickavasgar and Sambandar have sung the glory of this temple.

1) famous for its place or sthalam

3) Deity or moorthi. This temple is famous for all the three entities.

It is said that the marriage of Shiva and Parvati took place under the famous mango tree here or the Sthala Vruksha and to this day Hindus during special occasions like weddings and festivals always tie a string of mango leaves at the main entrance of the house. The processional image of Mother Parvati is ‘Elavar kuzali amman’. The tirtha(Sacred holy water which has been offered to the Lord and then distributed to the devotees) is named Sivaganga Tirtha. Pancha Mukha Lord Ganesh at the entrance is called Vikata Chakra Vinayaka. A reference to this is found in the first verse of Kachiappa Sivachariyar’s Kanda Puranam. The story goes that once Lord Vishnu used his Chakra against a demon to kill him but by mistake the Chakra got caught in the mouth of a skull of the deity Veerabhadra’s garland. In an effort to retrieve the chakra Lord Vinayaka performed a Vikata Kuthu(funny dance drama) before Veerabhadra. Not able to contain himself, the skull laughed, dropping the chakra from its mouth. Hence this Ganesha got his name ’Vikata Chakra Vinayaka’.

It is said that a visit to this temple is only completed if one also visits the Kanchi Kamakshi temple and the Kumara Kottam as most of the saints who had sung their verses and hymns had consecrated them to both Shiva and Shakti (Kamakshi) together. These three temples are known as Katchi Ekambaram.

Several festivals are celebrated here throughout the year. The Phalguni festival is the most important festival of Lord Ekambareshwar. It is celebrated for a period of 13 days and it is during this festival that the wedding of Lord Shiva and Goddess Parvati is performed and the venerated Tamil poems of the Nayanmars (Tirumurais) are sung in great splendour. It has colourful events with processions in Silver Rath, Silver Mavadi Servai and Gold Vrushab-the Nandi Vahan of Lord Shiva is the biggest festival of the temple drawing the crowds of devotees in lakhs. The crowds of devotees are also huge on New Moon, Full Moon and Pradosha days. Deepavali, Tamil New Year day and English New Year day are celebrated with special abhishekams and poojas.

Six worship services are offered in the temple every day. They are known as Ushad Kalam, Kaalasanthi, Ucchikalam, Pradosham,

On the Ratha Sapthami day in the Thai month(Jan-Feb),the rays of the sun fall directly on the Lord in the Sanctum Sanctorum which is considered an architectural marvel as it also speaks much of the knowledge of astronomy of the artisans who had constructed this temple.

Thou Art The Supreme Truth

Thou Abideth in All

Thou Art The origin of all

How To Reach The Temple

Through Airways-The international airport of Chennai is the nearest and it is situated around 75kms from Kanchipuram. Both public and private transport facilities are available at the airport.

Through Roadways-As it is only a few kilometers from the Quadrilateral National Highway, it is well connected by road The Chennai Metropolitan and State Express Transport operate frequent bus services from Chennai and it takes 2 to 3 hours to reach Kancheepuram from Chennai.